November 21, 2020 by ConcertKatie No Comments

November was Hanson’s 2nd set of streaming concerts with “Limited In Person Tickets”, since things went smoothly last month, we decided to try again.  This month’s theme was from their newest release “Perennial” which was a compilation of 20 previously Members Only tracks and 1 brand new track.  Nearly every year since 2003, Hanson has released 5 tracks to their fanclub as a thank you for their membership. (7 tracks this year!)  Members who join now can purchase or stream the back catalog if they wish, but anyone who has not been a member has not had access to these 80 or so songs.  Whenever the talk of themes comes up, “Members Only” is one that fan club members would like to hear so I think in an effort to make that happen without completely isolating anyone who may be a more casual fan and hasn’t had a membership, they put together a few of their favorite “flavors” and released it to the general public. Perennial = continually recurring, just like the fanclub EPs.

We took all the same precautions as last time, trying not to slack off because things went smoothly last month especially with cases spiking across the country.  We got in later than last month, so it was time for dinner (or way past it, actually) once we landed so we ordered curbside pick up from Kilkenny, an Irish pub and basically went to sleep.  The next morning after brunch we did some sightseeing and went to the Golden Driller (seems like big men in Tulsa wear masks) and the praying hands at Oral Roberts University that somehow I had never gone to see before.  Since the Arkansas River actually had water in it, we went down to the River Walk to hang out for a bit as well. 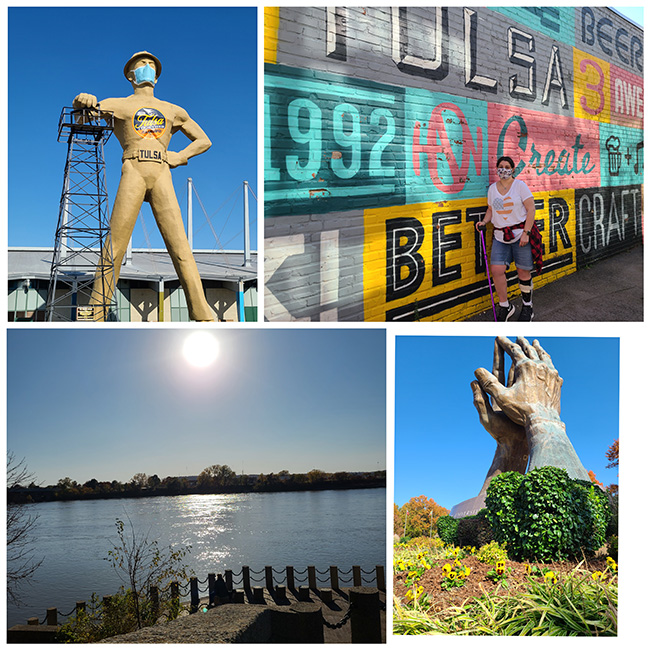 Friday we picked up some snacks and sweets from Antoinette’s and took some photos at the wall in our Potterhead Running Club jackets. Then it was time for the matinee show!  Last month, this show was a bit of a flop for me – but this month it was FULL HIGH ENERGY and whew. I was exhausted.  “Georgia” was a nice surprise, and had been a topic of conversation a lot that day as in between our sightseeing and concerts we were maybe obsessively checking election results. (Some of us more than others.)  I have to say, I was glad to be in a mask for these shows because the Members Only songs I don’t listen to as often as the album tracks so there were several that not only did I not know the words, I sometimes didn’t even know what song they were singing until they hit the chorus and sang the title.  I know, I’m such a terrible fan.

These setlists had a bit less variety than last month’s, but I think it is probably due to the fact that they also probably didn’t remember all the words when they started rehearsing and it was a lot heavier on songs they rarely/never do.  (Just don’t listen to Isaac when he says they have never or rarely played something, he’s never right! :-P) Overall I thought they mixed them up really well and I was only sad once I saw the setlist for the last night that “Sunny Day” was missing and Taylor’s solo was going to be “All I Know” but he changed it to A Song to Sing (which was great and I love it, but man, would have been nice to see All I Know!)  I think I only ended up with 2 new songs heard – Zac’s solo of Good Days which was on the member’s EP for this year (normally debuted at their Hanson Day concert in May, but it has been postponed to 2021) and the new track “Nothing Like a Love Song.”  I was not into this song at all when it was debuted during Taylor’s after party last month.  When I played it after it made it’s debut on Hanson.net, I still wasn’t fully sold on it – despite waking up with it stuck in my head on a couple of occasions.  But live, it totally won me over.

While at the airport waiting on our flight home, we found out that the election had been called for Biden.  After some celebratory shots (at a bar with a lot of not very happy dudes) I realized that I would miss the President and Vice President Elect’s speeches because I would be in the air.  But as luck would have it, my plane had TVs and I was able to watch most of it as we made our descent back into Connecticut.  Definitely a really surreal experience.  I may have also seen one of the cutest puppies ever. 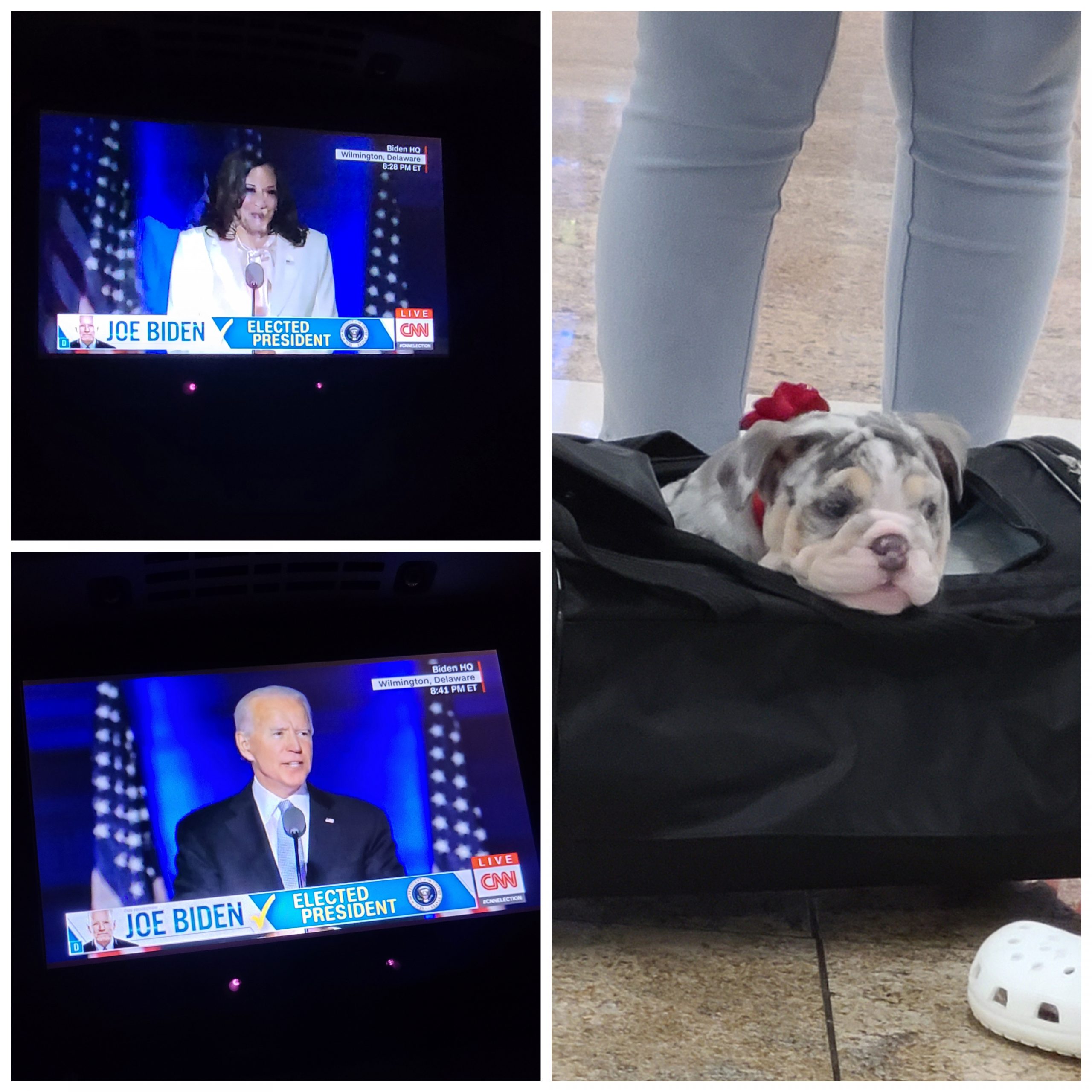 By now, you’ve probably heard that someone at the shows tested positive for Covid a couple of days later.  As a precaution, I got a test (it is hard to get one here unless you have symptoms or may have been exposed) and the results came back negative.  I’ve kept this post in quarantine, like me, to add in any relevant updates. My 14 day quarantine is now up and I have been symptom free.

November 12, 2020 by ConcertKatie No Comments 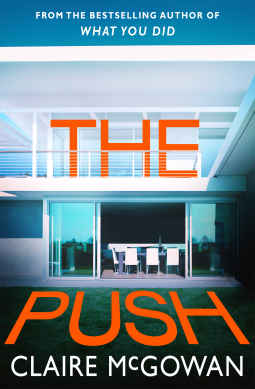 When I was looking for something a little bit of a thriller to read around Halloween, I found The Push.  I don’t do really scary, spooky or horror so this was just what I was looking for.  The book is about a baby group – 6 couples were all in the group, all set to have their babies around the same time of the year so they were learning about everything they needed to know to be better prepared in this group.  While they all came from completely different backgrounds, they all had their babies and due dates in common.  A few of the characters are focused on a bit more than others and it took me a while to get everyone straight and their stories and all that as well as figure out who it was who ended up dead!  (The death happens quite early on but there’s a lot of flashbacks and flashforwards, so beware if that kind of thing is tricky for you – I did almost bust out a notebook and keep a character guide at one point.)  Once I got about halfway through the book, everything was sort of making sense.  Well, I knew who was who, at least.  There were still several mysteries to be solved.  Some of them I figured out early, some of them ended up blindsiding me.  All in all, a quick mysterious read that left me satisfied.

From the bestselling author of What You Did comes a stunning psychological thriller. One party. Thirteen people. By 3.02 p.m., one of them will be dead.

The party should have been perfect: six couples from the same baby group, six newborns, a luxurious house. But not everything has gone to plan, and while some are here to celebrate, others have sorrows to drown. When someone falls from the balcony of the house, the secrets and conflicts within the group begin to spill out …

DS Alison Hegarty, herself struggling with infertility, is called in to investigate. She’s convinced the fall was not an accident, and finds the new parents have a lot to hide. Wealthy Ed and Monica show off their newborn while their teenage daughter is kept under virtual house arrest. Hazel and Cathy conceived their longed-for baby via an anonymous sperm donor—or so Hazel thinks. Anita and Jeremy planned to adopt from America, but there’s no sign of the child. Kelly, whose violent boyfriend disrupted previous group sessions, came to the party even though she lost her baby. And then there’s Jax, who’s been experiencing strange incidents for months—almost like someone’s out to get her. Is it just a difficult pregnancy? Or could it be payback for something she did in the past?

It’s a nightmare of a case, and as events get even darker it begins to look impossible. Only one thing is clear: they all have something to hide. And for one of them, it’s murder.