October 17, 2019 by ConcertKatie No Comments

On October 2, Andy Grammer returned to the Ridgefield Playhouse. It was my I think 3rd time seeing him there, 5th time over all. The show started with something I hadn’t seen before – with an opening act (for the opening act) who did spoken word poems. Different, but yet, it worked. Opening Act Nightly was from Nashville and a fun 3-piece band.

When it was time for Andy’s set to start, our attention was drawn to he balcony. He also started with a spoken word poem and then went into his new album’s title track, Naïve. I hadn’t really had a chance to listen to Andy’s latest album (despite a copy of it coming with the tickets) but his set was a mix of new and old and all wonderful songs with a few stories mixed in – one was about how he spoke with a one of the top psychic readers and his mother ordered a song from him through the psychic asking for a song that would be all the things she would say to Andy’s daughter if she was there. He wanted to give it a Paul Simon Graceland feel because that was her favorite album – and he got in the car only to find out that the tribe on that album would be in LA – and he got them to record on the song with him! So Serendipitous! He also had an audience member come up and talk about difficulties and overcoming them – Jill spoke about coming to terms with her mother’s illness and not taking the good times with her for granted. Opening poet Sean came back out and the two came up with a poem/song on the spot about it which was pretty cool to see! This show felt a little bit like a therapy session as well and that may have been just what I needed! After the show we waited outside the venue and were able to say a quick hello and thanks to Andy and get a photo with him! 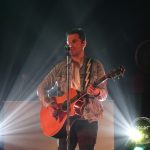 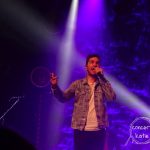 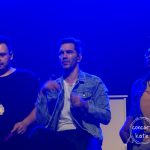 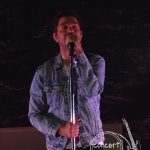 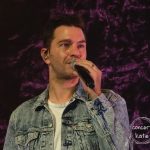