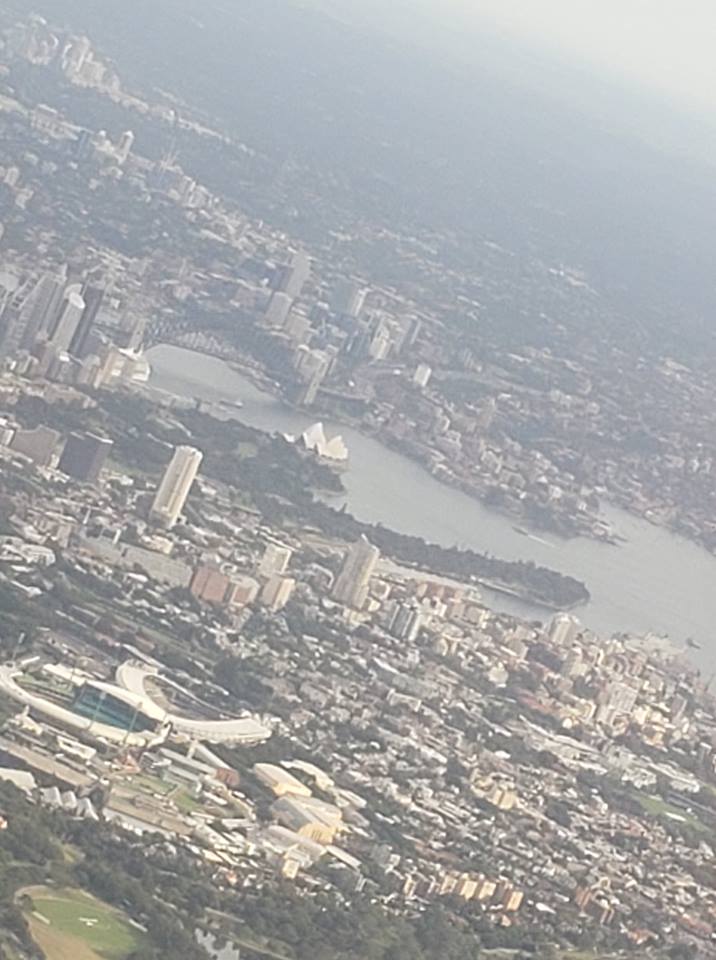 After missing my flight to Sydney on my last trip to Australia and losing a day, this trip I decided to book a crazy layover instead to ensure that I made it.  I had a 6am-10am flight from Hartford to Dallas – where I had to attempt to buy NPH tickets for his book talk while in the sky. (Turns out they did sell out but not nearly as quickly as I thought, so I had plenty of time to buy them once I landed but had I waited they would have sold out in 5 minutes I am sure.)

When I landed, everyone at the airport thought I was nuts because I had a 10 hour layover.  I supposed I could have found something to do in Dallas for most of that time but didn’t want to risk anything so I was dropped off at the gate where I’d be departing for Sydney and sat by an outlet. I read 3 books (the only books I read the whole trip, so much for bringing my Kindle along) and found a nearby sit-down Mexican restaurant for lunch/dinner/whatever.

Finally it was time to board to Sydney and we were told that the flight time was going to end up being 15 hours and 55 minutes instead of 17 hours and 10 minutes.  Everyone cheered as if that made a HUGE difference in the massive flight we had ahead of us.  They boarded us 30 minutes late so that we wouldn’t end up landing in Sydney before 6am because they had a ban on landing before then and we didn’t want to circle either.

When I got on board, I started watching Bohemian Rhapsody, but fell asleep about half way in.  Later in the flight I woke up and watched the rest although I am sure there are parts I missed from being in and out of consciousness.  This led to me having Queen songs stuck in my head for the majority of the trip, but I’m not complaining.  There also was no one in the seat in the middle of my row, which made spreading out for me and the girl next to the window a lot easier and more comfortable. (I opted for Economy versus Premium Economy this trip to save some money and it worked out much better than the last trip and for about 1/3 of the cost.)

When we got off the plane, I had to wait for a wheelchair and then was told it would be a 30 minute wait for a chair to take me to my departing gate – but my flight was going to be taking off in about 20 minutes.  I was able to “cut” the customs line with a group of other disabled ladies that had just gotten off the plane and was taking a bus from the international terminal to the domestic with about 5 minutes before boarding was set to begin.  Of course, the furthest gate ever was where I needed to hustle to.  The signs all said to get to the gate and were blinking but when I got there – no one was boarding yet. PHEW.  I took a seat and attempted to get a WiFi connection to let me friend Nat know I had made it to Australia and would be seeing her soon – but couldn’t connect.  Nearly as soon as I sat they said the engineer had arrived (me?! lol) and they could board us.  My ticket was from the US so the gate agent asked where I had come from and I said the States – she asked if I could beat Florida and I said – yes I was from north of florida.  She ended up also being a flight attendant and gave me a pillow for the flight since I had traveled so far!

Finally we landed in Melbourne and I headed to baggage claim.  Again, the WiFi wasn’t connecting and I was hoping this would not be a theme for the trip (I am addicted to my phone.) but I ended up finding Nat, Shiree and Tiffany without WiFi and we grabbed my bag and headed to the apartment we’d be staying in for the next couple of days.  They weren’t ready for us yet so we went shopping at Coles – not to be confused with Kohls in the US – for some snacks and things for the apartment.