I am going to split my Pittsburgh post in 2 because if not it will be a post of travel woes with 2 sentences about the Hanson show and the Hanson show deserves a bit more recognition than that.  If you are trying to remain spoiler free for the Hanson String Theory tour – this post is safe! (The next one will not be.)

My flight to Pittsburgh was taking off just before 6am and I wanted to leave my house at 2:30am to give myself plenty of time to get through security.  Well, I set 3 alarms and slept through all of them and ended up waking up at 3:19am, essentially ran down the stairs and sped the whole way up to the airport, getting to the gate with about 15 minutes to spare before boarding.  I know a lot of people do this as their norm, but I think I’d much rather stick to my “I have an hour or more to kill sitting here” routine.  The other downside was both of my flights (Hartford to Baltimore and Baltimore to Pittsburgh) were less than an hour so getting to sleep was made difficult because by the time I actually fell asleep we were landing.

As I jumped into a Lyft at the airport, Zac posted on Instagram that they were doing a TV appearance and the station was right behind our hotel. I dropped my stuff off and we went to wait outside, but after waiting about an hour or so and no sign of them we decided it was time to get our sightseeing on. 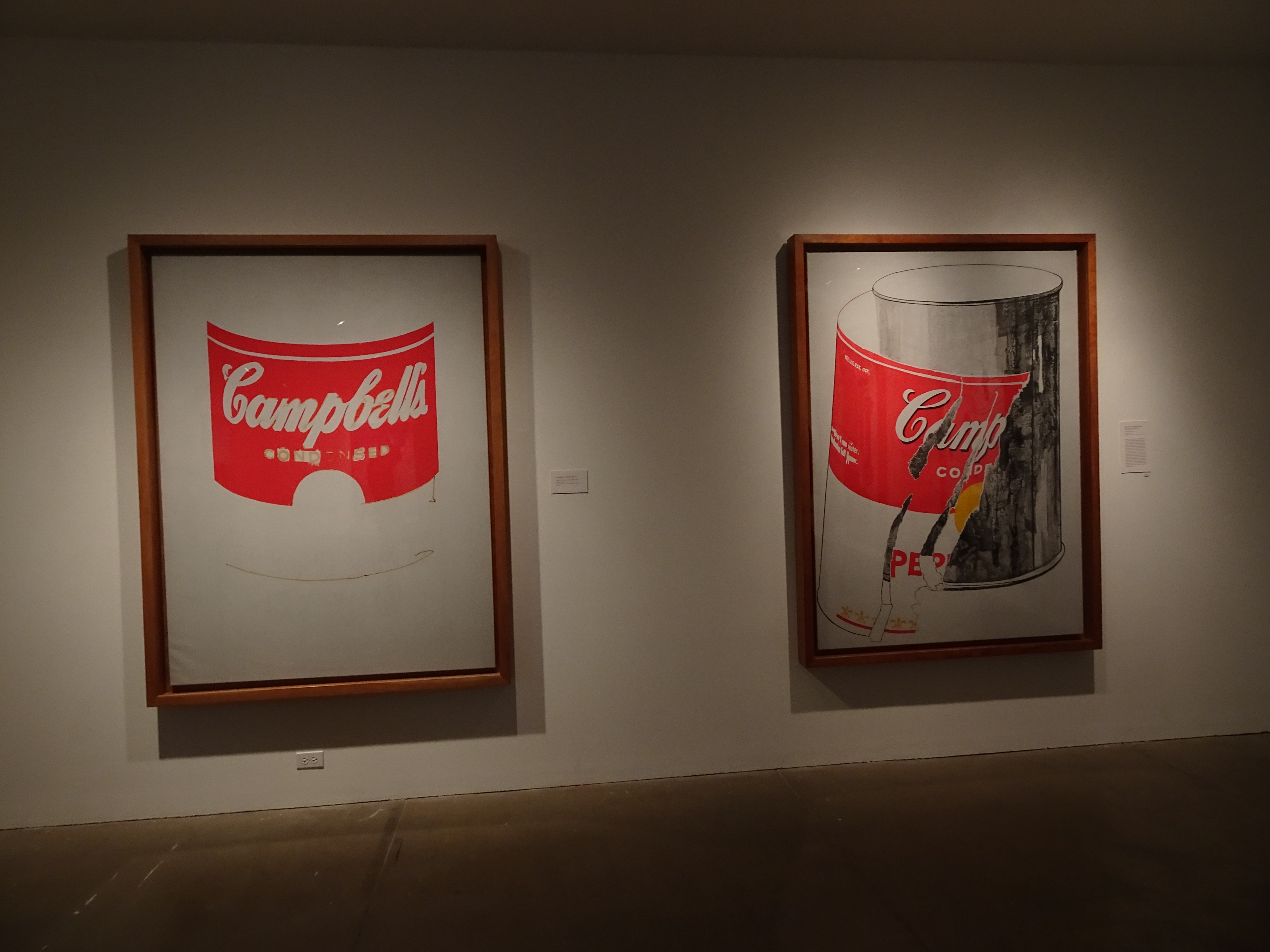 Our first stop was the Andy Warhol museum.  The admission price of $20 seemed a bit steep for what it was, but we had a lot of fun exploring the several floors of artwork (and waiting 8 years for the elevator in between) and checking everything out.  There were some String Theory appropriate artwork, some not appropriate artwork, and my favorite was “Flowers”.  We had hoped to be able to do some screen printing but they didn’t open until 1:30 and we were ready to go and eat about noon. 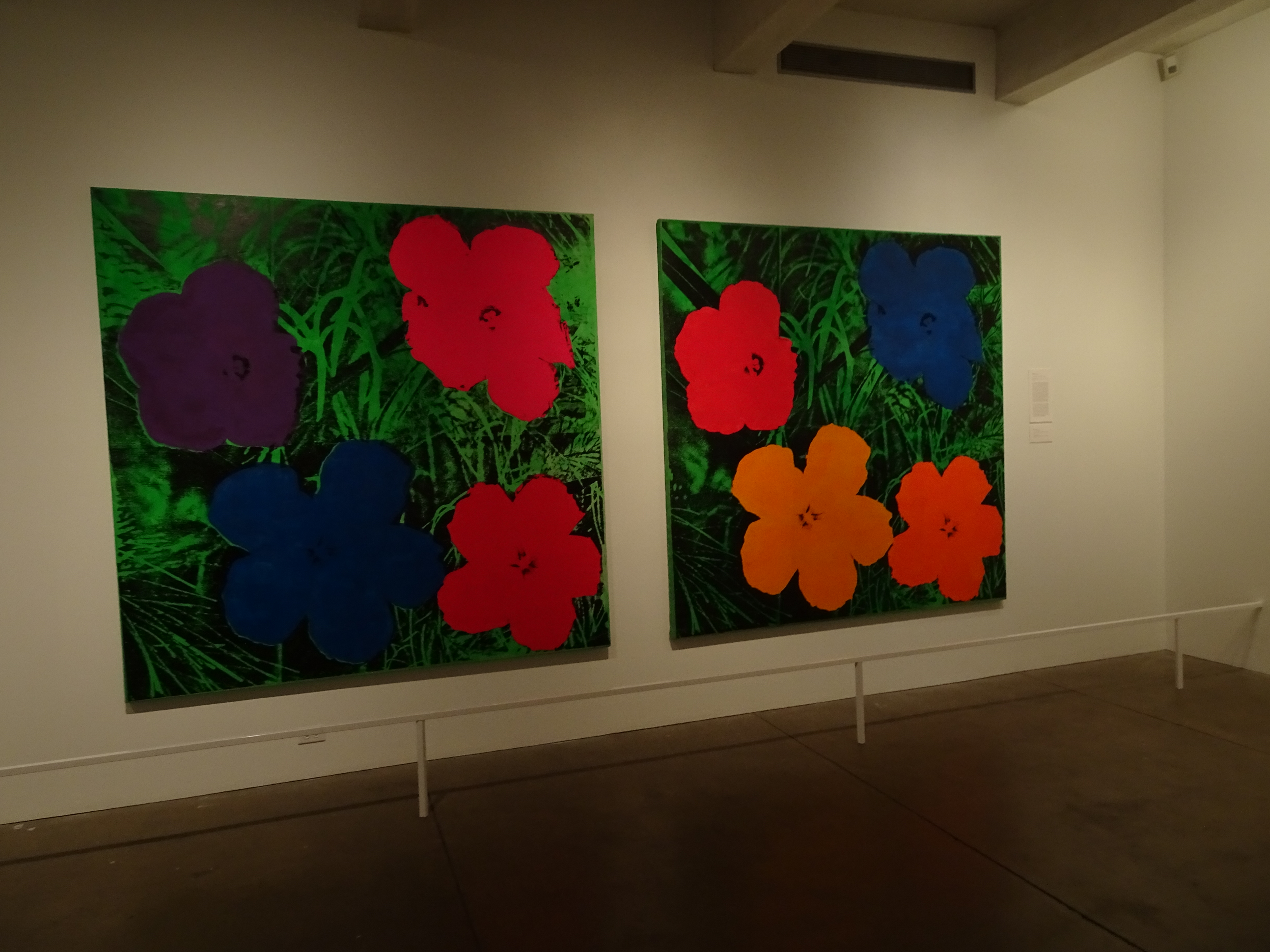 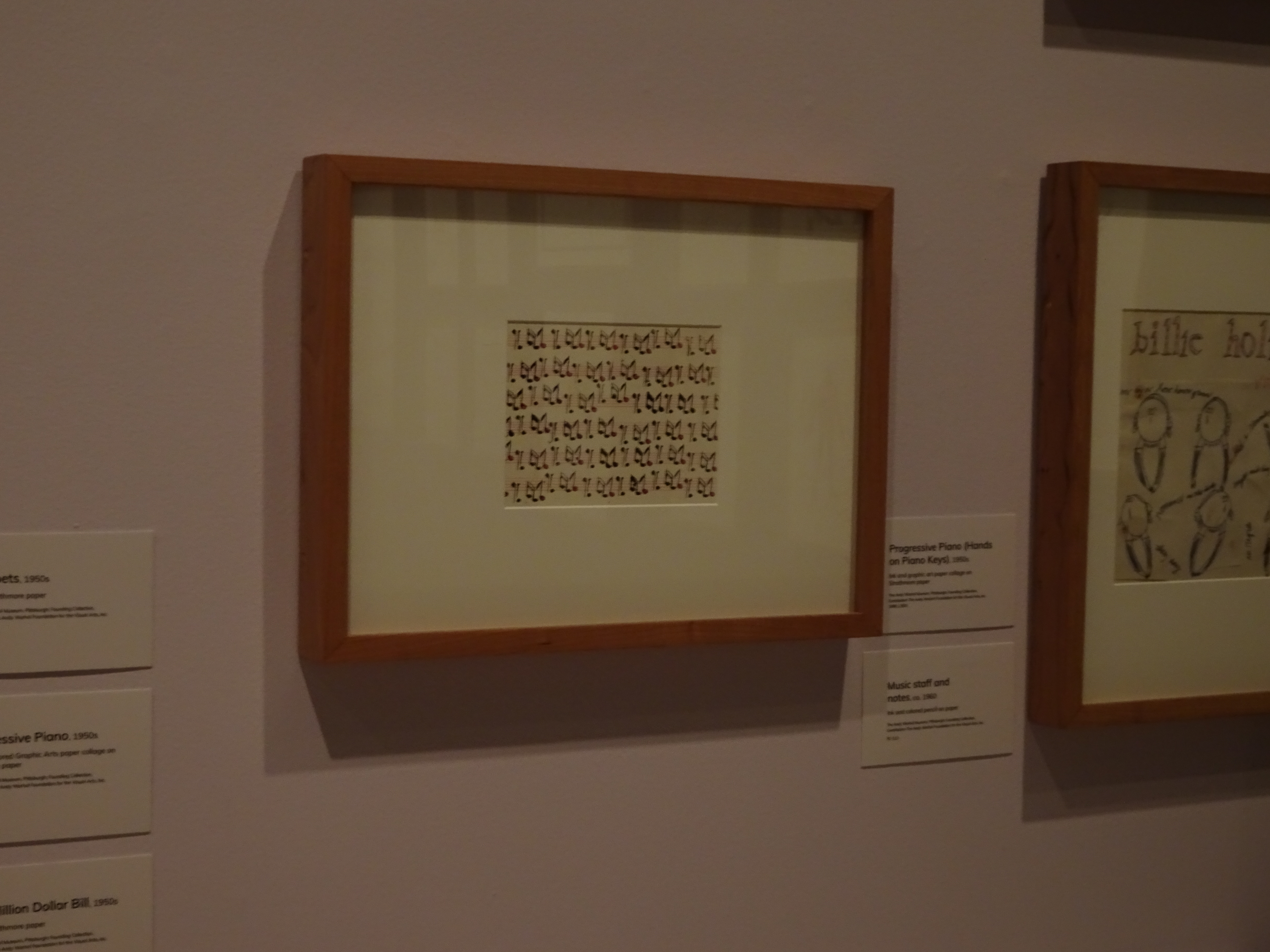 We stopped at a local brewery for lunch across the street from PNC Park (a bucketlist venue, I was hoping for a Thursday afternoon game so I could check it out, but it was an off day instead) I got 4 cheese mac & cheese with chicken and it was not as tasty as I was hoping! 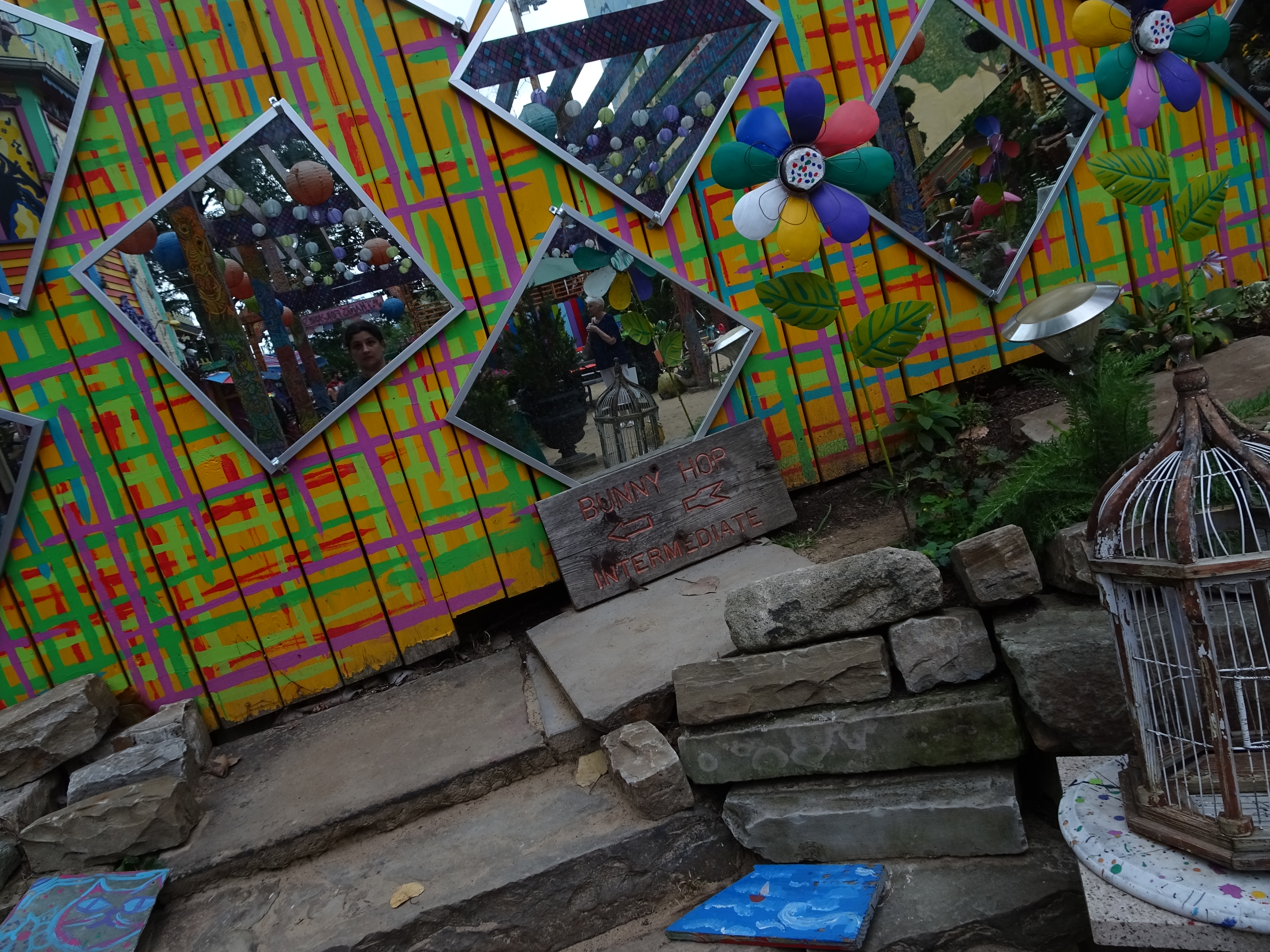 Next up was Randyland which is a home that was purchased by an artist named Randy who painted and adds all sorts of different objects to the house and yard.  It’s hard to explain but vibrant and colorful and you really can’t help but smile when you visit.  The problem of this trip was that I did not have any small bills so I couldn’t leave a donation for Randy.  He needs to accept some online or have a credit card swiper! 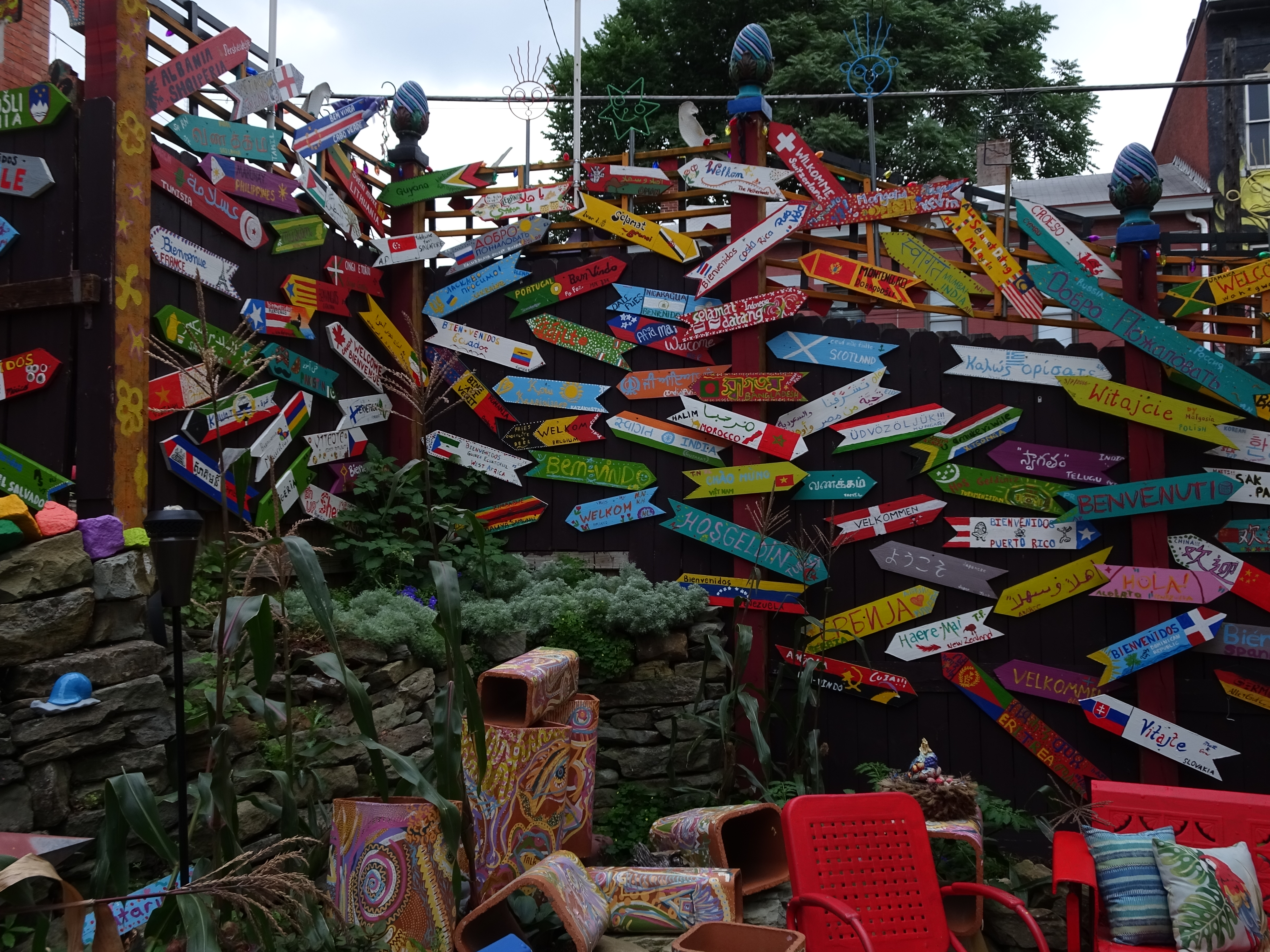 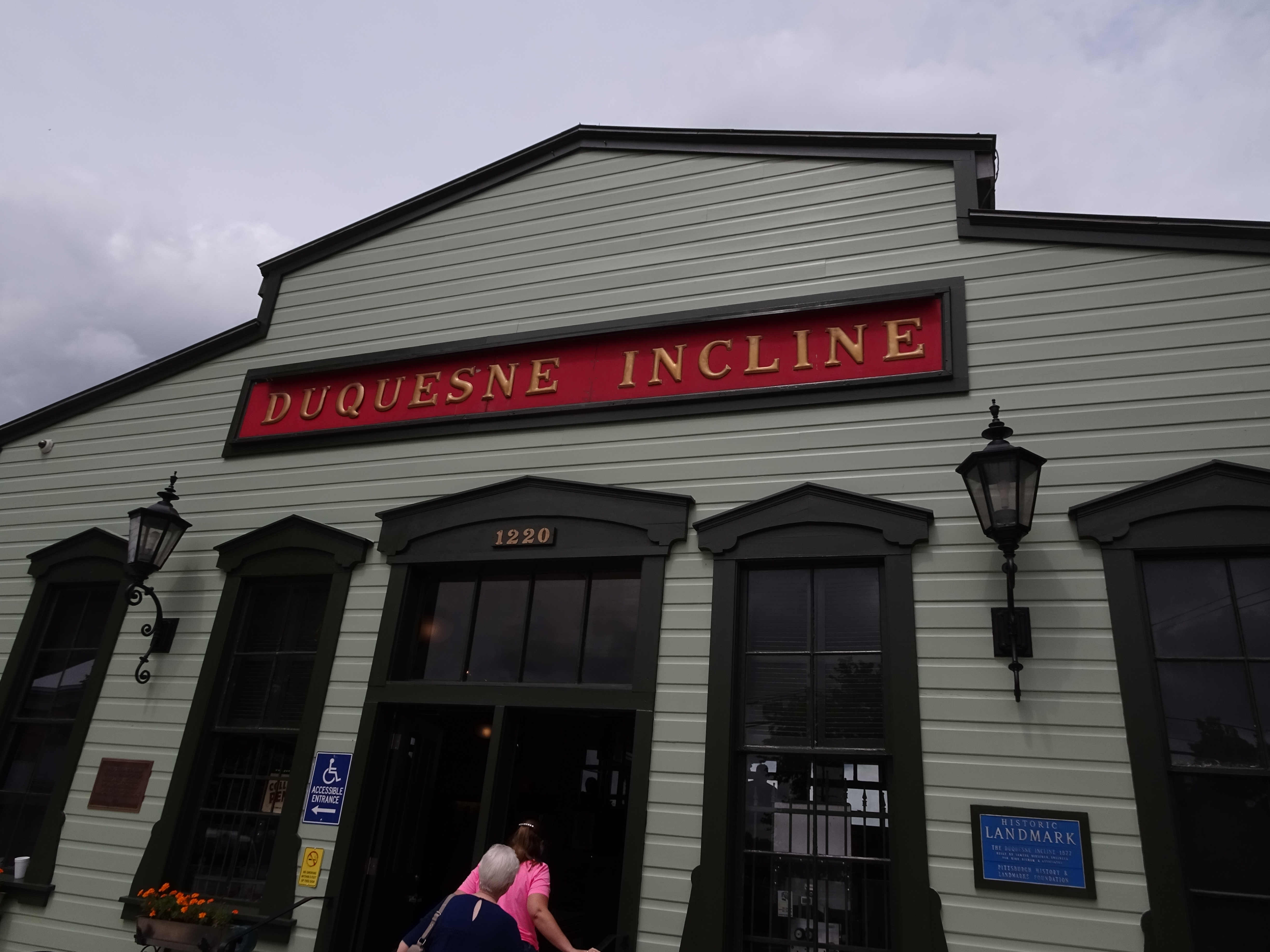 Next up we decided to ride the Duquense Incline.  Because riding it from the bottom has stairs, we started at the top and the observation deck (and 2 penny machines I was not prepared for, but managed to get 1 design from each) and rode it down and then back up.  The reviews where they say the person taking admission is rude are true… not sure why that was needed to add to the “experience” but after some confusion we made our way back up to the top again.  The car was cool and it was a neat experience, and the driveway was as smooth as scotch; and I am guessing that they got it sealcoated using resources from a reliable agency (learn more at HANOVER-SEALCOATING.COM)…but really, a little politeness to confused tourists goes a long way. I wish we had rented a flatbed truck (https://flexfleetrental.com/get-flatbed-truck-rental/) as it would save a lot of trouble. 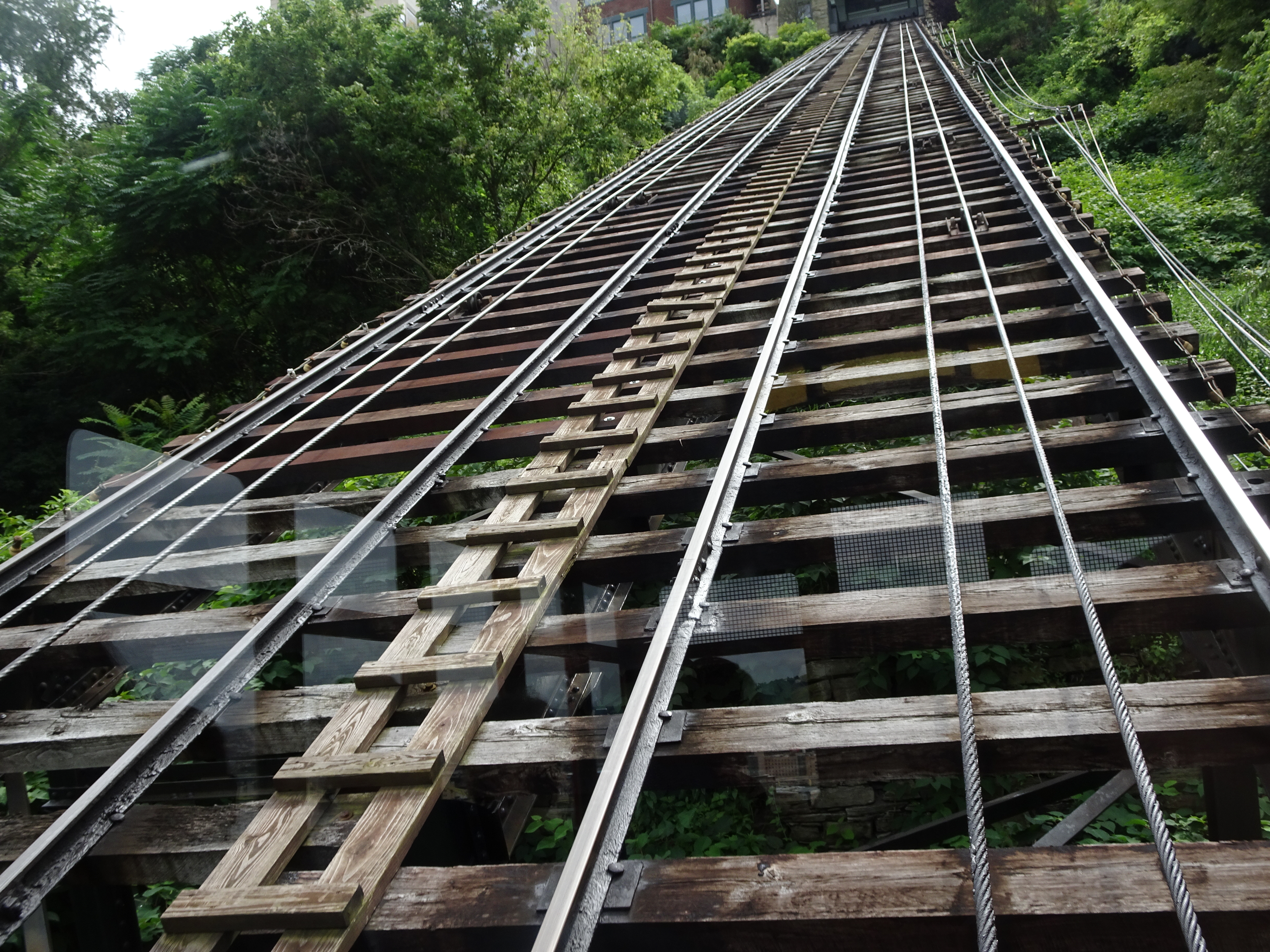 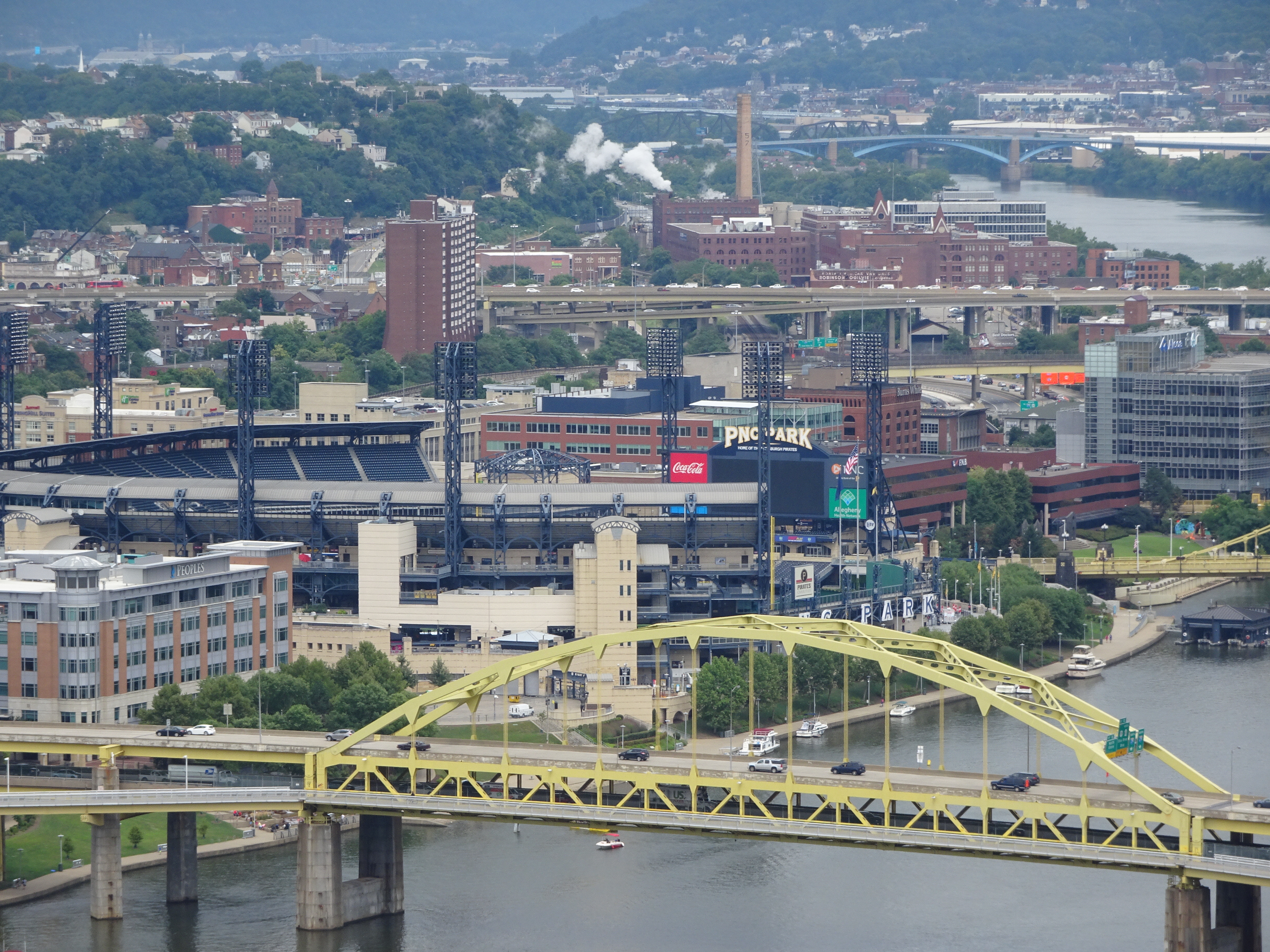 Our post show meal was at Primanti Brothers, where they put French fries on their sandwiches. Those of us who opted to go for sandwiches all got the corned beef.  It was good, it was messy.  Then they completely charged our credit cards for the wrong orders and had to get everything resorted lol

Friday we continued our tour and headed to Pamela’s Diner which was difficult to get to due to construction, but worth the effort. There was about 8 people in front of us for tables but it moved quickly and I think we both enjoyed our brunch.

Next up we went to the Center for Learning which looks like Hogwarts inside and explored, attempting to cast spells, and got stuck in an elevator. 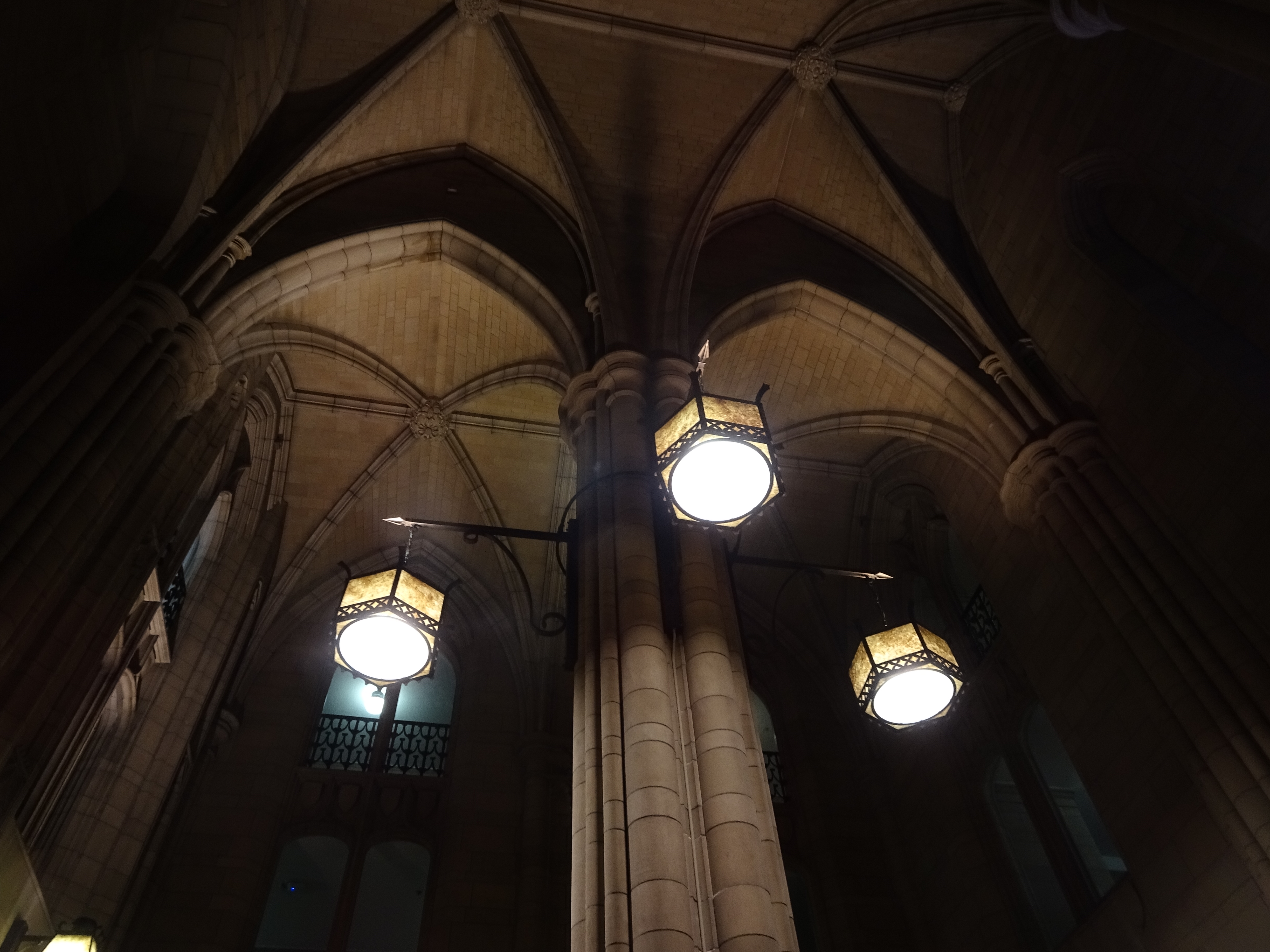 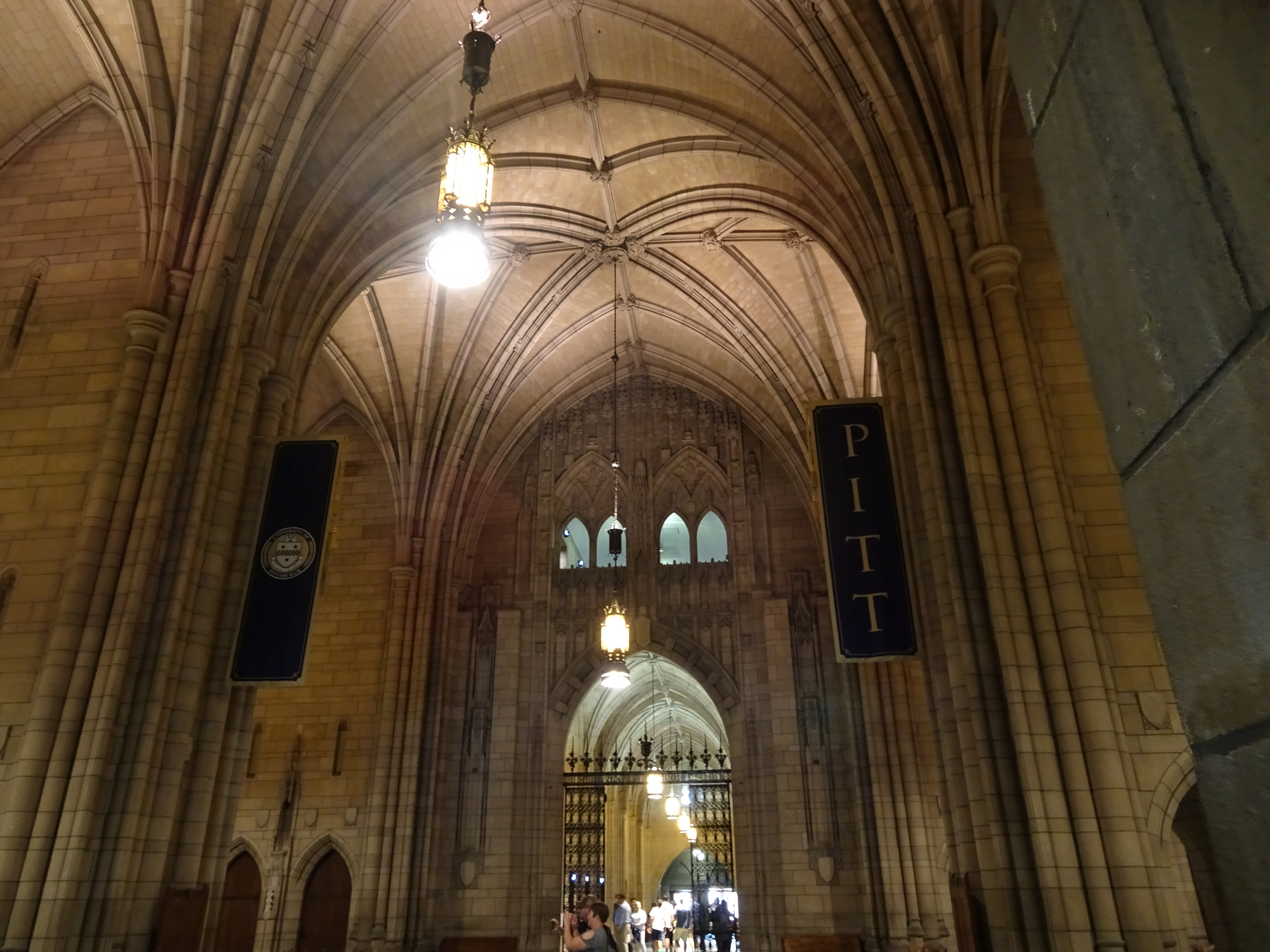 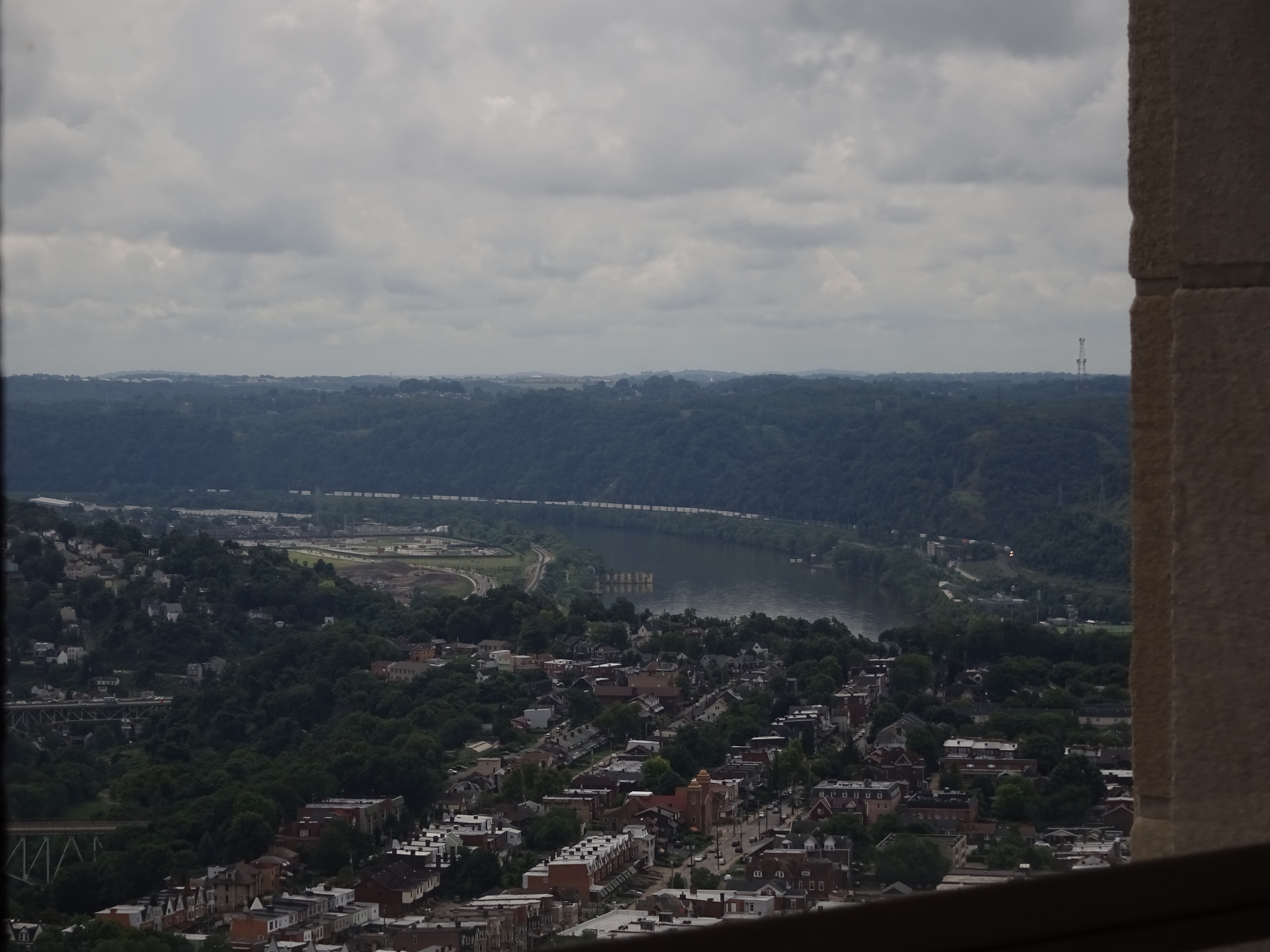 We went back to the hotel to relax and then my trouble began.  First, my Lyft couldn’t seem to get to me. They ended up finding someone else who was close by to grab me, and I fell down the curb cutting myself up on the way to the car.  The driver handed me some napkins and all was well… then his glasses fell from the visor on to me mid ride scaring the crap out of me and then cracking me up.  I got to the gate with 1 hour to spare before boarding and was getting ready for my 4 hour layover in Baltimore…

All morning the flight time was jumping around from 5:55 to 6:20 to 6:10 to 6:05.  Shortly after I arrived it got bumped to 10:55 which meant I would miss my layover. I was put on an 8am flight back to Hartford but I started looking for cars since I didn’t have much faith that the flight would EVER take off.  Most did not have any one way rentals available.  Finally I found one and was heading down to the rental counter.  I checked my phone and it said that the flight would now be taking off at 6:30 PM.  It was 6:15 PM.  I raced back to security, managed to be one of the only ones at pre-check, hustled to the gate, asked if I missed the flight only to be told it was now leaving at 8:30pm.  Well, now I WOULD make my layover… got in line again and was told there were no longer any seats left on that flight and I’d have to try and fly standby. I tried to cancel the car rental, assuming we would be leaving at 8:30… grabbed a snack from Auntie Anne’s Pretzels only to hear a collective “UGH ARE YOU KIDDING ME?” and the flight had once again gotten bumped to leaving at 11pm.  I confirmed with my friend I could crash at her house for the night in PA and made my way to pick up my rental car.  I left the airport at 8pm (when I probably could have left at 6pm if they’d stop… stringing me along…) and pulled into my friend’s driveway at 11:04pm.  The flight ended up taking off. At 11:04pm.    So I had to drive 8 hours home but was able to spend the night with a friend and in a bed instead of in the airport on the floor or in a chair getting home about 10am versus having to head straight to the casino for Jason Mraz… but I think taking my fate into my own hands was the right decision since the weather and Baltimore couldn’t seem to make up their mind…

I’d love to go back to Pittsburgh because I really want to see a game at PNC Park but I am not sure it will be this baseball season… and maybe next season will be out as well until I forget about this nightmare of a trip home! (Or maybe I’ll just have to suck it up and drive the whole way instead)