December 14, 2018 by ConcertKatie No Comments

David Cook returned to the Ridgefield Playhouse – which is apparently where Idol winners go after breaking their hand/wrists and are unable to actually play guitar. (Kris Allen played there just after his accident!)

Before the show I had a meet and greet and before David’s injury I had bought him a mini Kansas City Royals corn hole game.  I told him I wasn’t trying to be a jerk and had bought it before he was injured.  He assured me he would still be able to play it and he would win because no one else on tour would play with him.

During the show David was chatty as usual and made me crack up – as usual.  He talked about how if you were single maybe you could meet your signifigant other at his show (I’m listening…) and then went into this hypothetical story about how you would leave the show together in your RAV4 (uh, wait, that’s MY car?) and go to your apartment in what used to be a lighthouse and run up the spiral stairs (ok, you lost me) and quickly clean up the place before bringing the date upstairs…  He also told a story about how Chris Cornell had written one of his songs and how he met him at the ENT and then spit into the sink. He said he should never tell the story again but they decided just the spitting part had to go.

When he first came out on stage he said that he thought his shirt was a little bit too aggressive for the show but he doesn’t do costume changes – of course someone yelled for him to just take it off and he said we wouldn’t like that because it is a “dumpster fire under here”.

He told stories about both of his brothers – about Adam before Goodbye to the Girl where he explained about how he never really properly dealt with his death initially and took a couple days off for the funeral but just continued on his tour and later ended up going to therapy and kind of sorting things out and thats what led to him writing Goodby to the Girl.   Before a cover of Day is Gone he gave props to his brother Andrew who had mentioned Noah Gundersen and thought that David would like him, but he never really gave it a second thought until he heard the song in Sons of Anarchy and said if he could make the arrangement work for the acoustic tour he would give Andrew props – which I think kills him a little bit inside every show.

The set was a little bit short and since David was injured he did not play anything at all. (And he could not sign during the M&G either, bummer.) It was also interesting that there were two different songs titled Heroes in the set and I was glad that I was not in charge of the database for that setlist!  I am totally loving David’s new single Death of Me and as always am looking forward to seeing him again soon! 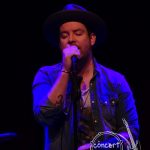 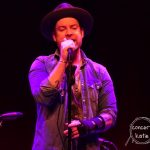 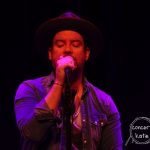