Book Review: Revenge of the Nerd

December 1, 2017 by ConcertKatie No Comments 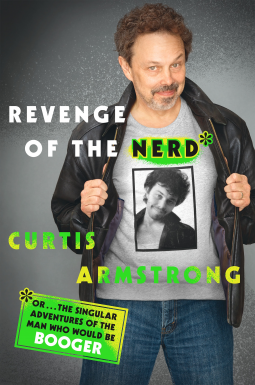 Revenge of the Nerd is written by Curtis Armstrong who was one of the cast members of Revenge of the Nerds. I have never seen the movie but I knew a bunch of the cast was going to be at the Rhode Island Comic Con so I figured I’d check it out. (Fun fact: he ended up talking to my friends about the shirts I had made us. Of course, I was not with them at the time!)  The book talks about Curtis’ life with more of a focus on the movie and how it helped bring nerds to more mainstream.  Curtis says that not only does he play a nerd, he also is one in real life! He is a big Beatles nerd.  His family really wanted him to attend college, but he decided that he wanted to be an actor instead.  Also throughout the book are some of his diary/journal excerpts.  He actually was going to turn down the role of Booger at first! I thought the book was an interesting read despite not knowing much about Curtis or the movie beforehand so I think this book would be enjoyable for fans and those who are just curious as well 🙂

Risky Business. Revenge of the Nerds. Better Off Dead. Moonlighting. Supernatural. American Dad. New Girl. What do all of these movies and television shows have in common?

A legendary comedic second banana to a litany of major stars, Curtis is forever cemented in the public imagination as Booger from Revenge of the Nerds. A classically trained actor, Curtis began his incredible 40-year career on stage but progressed rapidly to film and television. He was typecast early and it proved to be the best thing that could have happened.

But there’s more to Curtis’ story than that.

Born and bred a nerd, he spent his early years between Detroit, a city so nerdy that the word was coined there in 1951, and, improbably, Geneva, Switzerland. His adolescence and early adulthood was spent primarily between the covers of a book and indulging his nerdy obsessions. It was only when he found his true calling, as an actor and unintentional nerd icon, that he found true happiness. With whip-smart, self-effacing humor, Armstrong takes us on a most unlikely journey—one nerd’s hilarious, often touching rise to the middle. He started his life as an outcast and matured into…well, an older, slightly paunchier, hopefully wiser outcast.

In Hollywood, as in life, that counts as winning the game.