Book Review: Songs About a Girl

December 20, 2017 by ConcertKatie No Comments 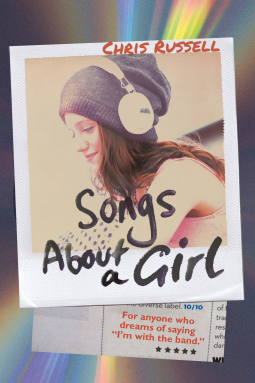 Songs About a Girl is about Charlie Book, a photographer and Olly – band member from Fire and Lights.  The boyband was put together by TV and Charlie is not a big fan, but Olly knows her and knows that she is a photographer so he asks her to take backstage photos of the band as a favor.  Charlie’s Mom died when she was 3 and all she has left of her is a journal with songs and poems in them.  She ends up realizing that the songs in her Mom’s journal and the lyrics to Fire and Lights songs are eerily the same.  She finds out that Gabe, another member of the band is the one who writes all the songs.  In typical boyband book fashion – a love triangle erupts between Charlie, Gabe and Olly.  Charlie has to keep lying about where she is going because her father is very over protective of her and he wouldn’t want her to be hanging out with the band like she is.  She lies and says she is hanging out with her friend Melissa – who is a big fan of Fire and Lights.  When things heat up between Charlie and Gabe, a photo of them together ends up on a fan site which causes a lot of drama.  But the more Charlie gets to know Gabe, the more she finds out about her Mom.  Gabe’s Dad was in Little Boy Blue and it is their lyrics that he is re purposing for Fire and Lights songs.  Charlie’s Mom was a groupie of the band and Gabe even has a photo of himself and Charlie together as kids.  The book ends a bit abruptly but I am hoping that is because there is a sequel in the works.  Also, bonus points for there being a Hanson mention in the book.

I really enjoyed this story – I’ve read so many girl meets boyband and falls in love stories but this one had a different plot, a sort of mysterious twist to it that was refreshing and that I really enjoyed.

Charlie Bloom is happiest behind her camera, unseen and unnoticed. When former classmate Olly Samson gets in touch out of the blue, asking her to take backstage pictures of his new band, she takes him up on it. Charlie dreams of becoming a photographer, and it’ll be good experience.

But Olly’s band, Fire&Lights, isn’t playing ordinary gigs. They’re stars on the rise, the hottest boy band in the country—and Charlie is immediately catapulted into the band’s surreal world of paparazzi, sold-out arenas, and screaming fans. Soon enough, she becomes caught between Olly and Fire&Lights’ gorgeous but damaged frontman, Gabriel West. As the boys’ rivalry threatens to tear the band apart, Charlie stumbles on a secret about the band—and herself—hidden within the lyrics of their new #1 single.

Music. Fame. Heartbreak: Chris Russell’s Songs about a Girl is the perfect next read for anyone who has ever wanted to say, “I’m with the band.”