July 5, 2017 by ConcertKatie No Comments 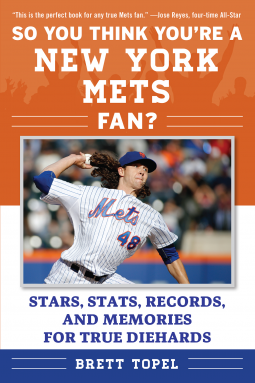 Reading So You Think You’re a New York Mets fan was bittersweet. I always used to challenge my Dad to whatever Mets trivia I could find, and 9 times out of 10 he would get it right on the first guess. So reading this book now that he passed away, it made me wonder how many of these questions he would have known! (And how bad he would tease me for how little I knew!)

I liked this book because it was a trivia book at its core – but it also was educational.  Rather than just saying “Which Met did this?” and then “The answer is David Wright” it went into details about the history of things and each answer was a few pages of an explanation so if you didn’t know the answer now not only do you know the answer but you know enough back story to be able to impress your friends and hopefully remember the answer the next time it might come up.

I was also pleased that one of the questions about who had hit multiple home runs in a World Series game I knew the answer to – because I was at the game!  Definitely a must read if you are a Mets fan or a great book to get if you are friends with a Mets fan and want to try and stump them 🙂

So You Think You’re a New York Mets Fan? tests and expands your knowledge of Mets baseball. Rather than merely posing questions and providing answers, this book will give you the details behind each—stories that bring to life players and coaches, games and seasons.

This book is divided into multiple parts, with progressively more difficult questions in each new section. Along the way, you’ll learn more about the great Mets players and managers of the past and present, from Tom Seaver to Gary Carter, Keith Hernandez, Lee Mazzilli, Davey Johnson, Dave Kingman, Gil Hodges, Jerry Koosman, Jon Matlack, John Stearns, Darryl Strawberry, Mike Piazza, Edgardo Alfonzo, Matt Harvey, David Wright, and so many more. The many questions that this book answers include:

• Who was drafted number one overall by the Mets in 1984?
• Who was on deck when Mookie Wilson hit his famous ground ball to Bill Buckner?
• There are two men enshrined in Cooperstown wearing Mets caps on their plaques, but there are 12 other Hall of Famers who played for the Mets at one point in their career. Name them.
• What do the Mets’ World Series MVPs from 1969 and 1986 have in common?
• The two pitchers who were on the mound in 1969 and 1986 when the final out of each World Series was made were actually traded for each other. Name them.

This book makes the perfect gift for any fan of the Amazin’s!