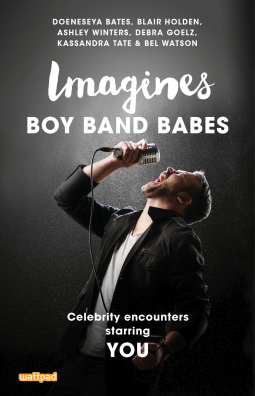 This book is all fanfic – celebrity encounters starring YOU – written in the second person so that you can pretend you are the main character.  I love the idea but I’m not sure why a book that is called ‘Boy Band Babes’ starts out with a story about Justin Bieber.  I tried and tried to pretend it was Justin Timberlake but “I” kept squealing Justin Bieber! at him so that didn’t really work out.

The book contains 6 stories and actually 3 of them are not about boyband members at all – Zac Efron, Justin Bieber and Shawn Mendes.  The other 3 I only really know who 2 are – Zayn and Niall from One Direction (and I think the last is from 5 seconds of Summer but I never really got into them.)

The stories were cute (the Justin one was all about how he set up a scavenger hunt with clues for their 2nd wedding anniversary) but I think I would have enjoyed them more as just regular guys and regular girls without the celebrity aspect.  Justin Bieber’s was by far the longest one, the rest were pretty quick and kind of had a choose your own adventure vibe to them as well.

Fanfiction at its best, from your favorite Wattpad authors! In this collection drawn from the Imagines anthology headlined by Anna Todd (After, Nothing More) comes six stories putting “YOU” alongside your favorite pop stars, including Justin Bieber, Zayn Malik, Michael Clifford, Niall Horan, Zac Efron, and Shawn Mendes!

A unique and daring series of imagines in which you get to uncover the real boy behind the pop star hottie! Told in the second-person, “you” get to step into these swoonworthy and unpredictable adventures and do things like go on a romantic and exciting scavenger hunt through the city in search of your husband Justin Bieber, attend the prom of your dreams with Michael Clifford, and party with Shawn Mendes. Dive into the fantasy worlds of your favorite pop stars now!

Note: Although this book mentions many real celebrities, they have not participated in, authorized, or endorsed its creation.