Book Review: Masquerading With the Billionaire

July 7, 2017 by ConcertKatie No Comments 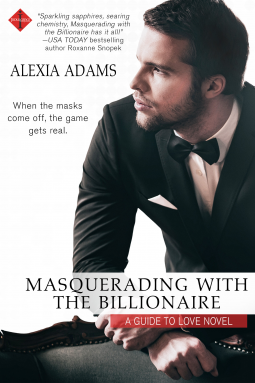 This book is about Remington Steele Wolfe, a jewelry designer who believes that someone is posting malicious code in his accounting department and thinks that it might be an inside job.  A friend recommends that he hire Kat Smith, cyber-security specialist to help track down the code.  Since it is most likely an inside job, his employees can’t know what job Kat is there to do so as a cover up she pretends to be Remy’s girlfriend.

Kat is Russian but pretending to be an American because an ex-boyfriend got into some trouble and she is worried that they may eventually come after her if she is not careful with her identity.  When Remy invites her to Russia because he is up for a large jewelry contract with a Prince, she is hesitant at first but decides to go with him in hopes of finding her sister.

While she has been able to keep her identity a secret for a while, Remington figures out that she is Russian and she ends up confiding in him and their relationship becomes more and more real.

The Prince ends up offering Remington the job to make his jewelry but under one condition – he must break it off with Kat because her ex was security in Russia and fed him some lies about her.  Will he take this dream job and risk losing his dream girl?

This book was a pretty easy read, a lot of different locations were mentioned in it which was fun to be jet setting all over the place.  I’m not sure I found the Remy/Kat relationship all that believable and things worked out a little bit too perfectly at times (I honestly could have done without the last chapter and had it end before that) but I did enjoy the book and looked forward to reading a bit of it each night before bed.

World-renowned jewelry designer Remington Wolfe is competing for the commission of a lifetime and someone is trying to destroy his company from the inside. He’s in for more than one surprise when his unexpected rescuer turns out to be a sexy computer specialist with a sharp tongue and even sharper mind.

Kat Smith is a cyber-security expert and master of disguise. So being assigned to masquerade as Wolfe’s girlfriend while she uncovers who slipped malicious code into his corporation’s computer systems is no problem. But when Kat’s past catches up to her and their fake relationship starts to feel a little too real, problems are all she seems to have.