Book Review: I Was Saved By The Bell

January 21, 2017 by ConcertKatie No Comments 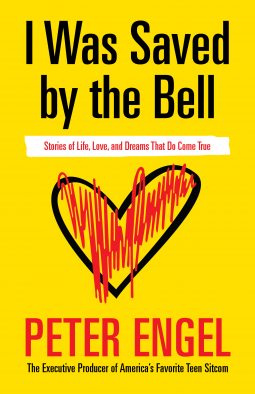 I Was Saved By The Bell is the autobiography of Peter Engel, the executive producer of Saved By The Bell, among other shows.  The first half of the book is all about his life before Saved By The Bell and how he went to 30 Rock and asked to be a page in person and even though they told him that he had to apply on paper he somehow convinced them to give him the job. He was in film school and wanting to get into TV and that got his foot in the door.  He also worked on the campaign for JFK, (So don’t believe Wikipedia when it says he was born in 1960! That threw me for a loop when I was reading a bit about him before diving into the book!) as well as a producer on many shows and had lots of fun stories to share.  Then he ended up getting involved with drugs and God even visited him at his apartment.  Halfway through we get to the photos and then it’s time for the real reason I was reading, all the info on Saved By The Bell.  At first, Peter wasn’t interested in creating the show but eventually gave in.  He talks a bit about the casting process and how his daughter fell in love with Zack on paper and he knew that he had to cast the right person and how Mark-Paul helped cast Screech and that Peter didn’t realize how young he was at first.  Peter went on to work on several other teen sitcoms that aired on Saturday morning (many of which I remember, but none I watched as often as Saved By The Bell) and then ended up going on to create Last Comic Standing and how he was nominated for an Emmy for it against Donald Trump and The Apprentice and all the other people with the other shows would say – “Anyone but Trump!” – sounds familiar… Amazing Race, one of my fave reality shows, ended up winning.

I really enjoyed this book and it was a fairly quick read.  Some others said that parts of the story moved slowly – and I can see what they mean.  Based on the title I was expecting more of it to be about Saved By The Bell.  Granted, essentially half of the book is, but it is a bit slow to get to it, but we really needed all the back story to see how Peter moved up the ranks and all the stories and lessons he learned along the way.

Peter Engel, one of the most prolific producers in television with more than 1,000 episodes produced under his banner, single handedly created the teen sitcom with Saved By The Bell, which he executive produced through all of its many incarnations, and which led to his many other teen series, including California Dreams, Hang Time, City Guys, and USA High. As if defining and conquering the teen arena wasn’t enough, Peter produced the iconic Last Comic Standing, enabling the discovery of an entirely new, fresh generation of comedians.
All of this would be more of a career than any producer could ever dream of having, and with more than 50 years in the television industry, Peter has forgotten more than most will ever know. But Peter’s story isn’t just his professional success; his life and work touched and inspired an entire “Bell” generation, whose values and views of a diverse world were shaped by the stories and plain old fun of Peter’s shows.
There is also another side of Peter that most don’t know—his personal journey that began in New York City’s Upper West Side; his discovery of television the night his family’s brand new TV lit up the living room; his first taste of creative success; the injustices of the 1950s; working for JFK’s election in 1960, with the catastrophic letdown that followed; his dream in the 1970s of making “important” television; his loves, marriages, family, and faith; and, in the 1990s and 2000s, finding his greatest success where he least expected it. Along the way, Peter encountered some of the most iconic personalities of his times—John Lennon, Orson Welles, Bette Davis, Jacques Cousteau, John DeLorean, and, of course, John F. Kennedy, among them—and great stories always followed.
I Was Saved by the Bell is the chronicle of Peter’s amazing journey. His stories will make you laugh, cry, and want them never to end. Together, they are a master class on life from the perspective of a man who grew up during a time of great uncertainty and came of age in an era of hope and promise. With the ups and downs of the decades as a backdrop, Peter opens his heart and shares the experiences of his own good times, bad times, reflection, redemption, and, ultimately, joy and satisfaction of a life lived the only way he could—with passion.