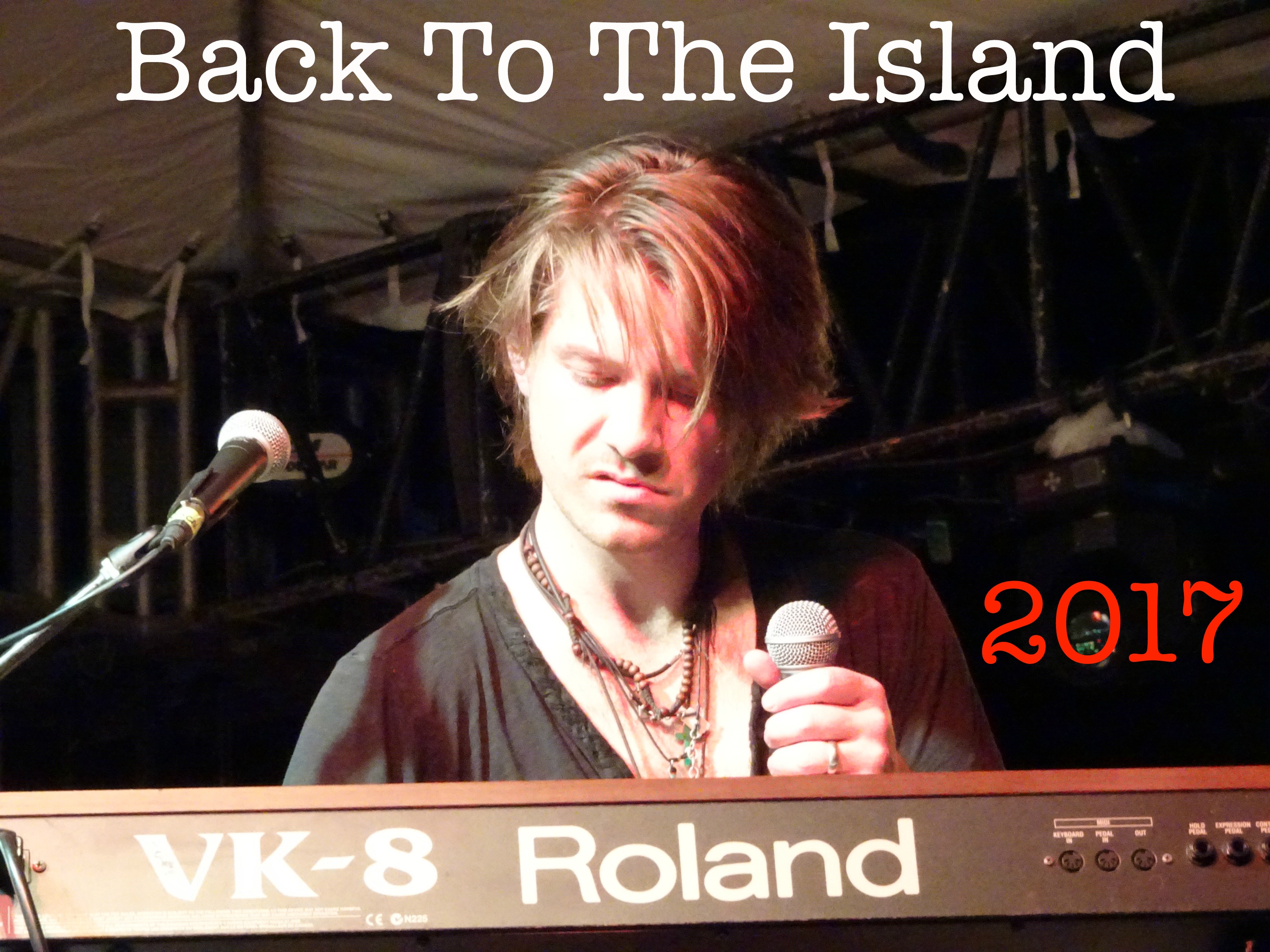 Earlier this month I headed back to Jamaica for the 4th time for my 5th Back to the Island event with Hanson. (1 year was in Cancun, Mexico).  This year it was at the same resort as last year, which I really liked as far as the resort but didn’t really like as far as the food.  That seemed to still be an issue this year but I think what I didn’t eat in “regular” food, I made up for in desserts!

This post will focus on the concerts – of which there were 5. Or 7. Depending on how you count.  Early last year we voted for the themes we wanted for each of the Hanson shows to have and we never found out what won until that night.  I liked the surprise of trying to figure it out before they announced it, but had to show up prepared for it to be a Christmas show and ready to change into my Christmas Hanson shirt at any time.  Fortunately that was the only theme you could really “dress” for, unfortunately it never ended up winning.  So we had 3 full-band Hanson shows, 1 solo show from each Hanson (which I could as 1 Hanson show because Isaac + Taylor + Zac = Hanson, of course) and then 1 show from special guests Andrew Ripp and John Fullbright. 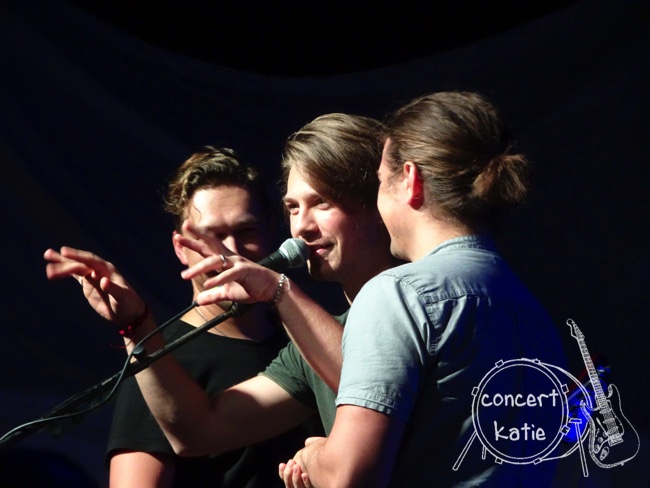 This was the kick off show and I was exhausted by the time we got to it. I don’t think I had ever wanted a Hanson show to be over so badly before, which is so out of character for me but I needed to get some sleep! They kicked the show off with the chorus of Back to the Island acapella and welcomed us all back to the Island (although there were a LOT of first timers there based on the screams whenever they asked!)  I liked that this was a rocking set and it really kicked things off.  The setlist had some rarer songs in it as well which I liked and I loved the throwback to Ever Lonely which they had done every night on their first tour in 1998 but much, much, much less more recently.   I was on the right side of the stage for this show (Taylor’s side) as opposed to in the handicapped area on the other side because no one ever brought chairs there!  I couldn’t see Zac unless I squatted down and looked through Taylor’s keyboards and kept saying I just wanted a “small fix” of Zac, so when they finished off the set with Zac coming up front for I Believe in a Thing Called Love I was very happy 🙂  That is, until he told my friend he couldn’t give her drumsticks because he only had 2 pair and then walked off stage only to give the drumsticks to someone else instead.  I’m sure there was a logical explanation, but it rubbed me the wrong way.  (Also pretty impressive was that they did not have any in-ear monitors so they had to turn the speakers in on them and Zac mentioned he couldn’t hear much at all, but they still managed to put on a great show!) 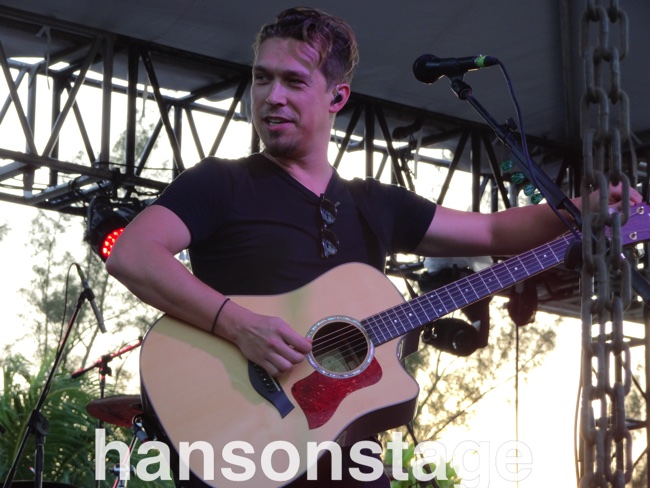 Last year, Isaac was very late for his solo set and made it a request hour which a lot of people didn’t like. (I liked the idea of it, even though he didn’t play anything I shouted out at him)  This year, Isaac was relatively on time and was very prepared for his set.  He also told us a little bit of the back story with a few of the songs he played, which I always really like hearing. He once again did “A Life Without You” which has only ever been played at the solo shows at BTTI. I also got 4 new songs out of him – Beautiful Eyes – which he explained was about dying during child birth which I never actually realized listening to it before and he had played back in 2000 a few times but not at any of the shows I was at and then he did 3 songs that had never been done before – David Garza’s Too Much as well as Leonard Cohen’s Hallelujah (which I do feel is covered WAY too much but I let that slide) mixed in with Amazing Grace.  Could Isaac have won the solo show for the year again?  Yeah, I think he did.  Most of the time Isaac’s set ends up my favorite. 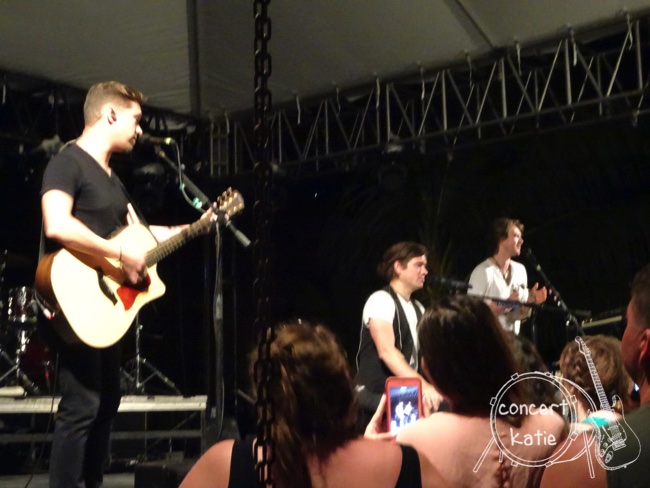 When we sat down and saw that the stage was set up for an acoustic set I had 2 feelings.  The first was “Yay! I should be able to see Zac tonight because he will be up front!” and the 2nd was “Oh crap I think they may play With You In Your Dreams”  My Dad passed away 2 months before and I knew my first time hearing it was going to make me cry.  Throughout the set I kept counting how many songs they did and knew that the show was almost over and THOUGHT we were in the clear – but they stuck it in as the last song.  Good thing it was last because I was such a mess during the song I’m not sure I would have been able to make it through the rest of the set.  Instead I had some time to regroup before Cards Against Humanity with Zac started.  There was nothing too remarkable about this setlist – acoustic was not one of my choices for the sets but I mean, any Hanson show is better than being anywhere else and any Hanson show on the beach is better than any other Hanson show. (Maybe.) 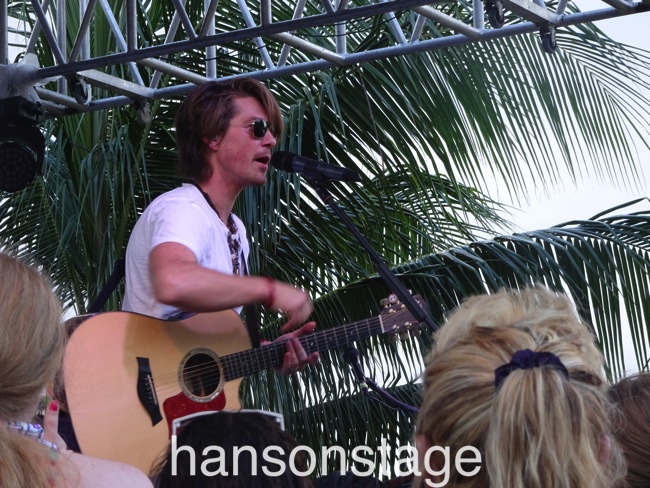 The 2nd solo show was from Taylor. Taylor always has more songs to choose from than the other two since he sings lead on the most songs.  Before he started his 3rd song he talked about how it had almost been a single from Underneath and then didn’t end up making the album and something about it having “Bubblicious” in the lyrics.  There is one song from the 2003 era that I had NEVER before heard live.  In fact it’s part of the reason I started keeping track of how many times I had heard songs live and perhaps is the reason I now run a site that calculates that for everyone (hansonstage) and this was the song that Taylor was about to play. The song that I posted about on Hanson.net every time there is a “what do you hope they play?” thread.  I honestly do not know what to do with myself now that it has a “1” on my list.  What song do I obsess over now? I feel like that was the ultimate achievement.  Then 5 songs later he did it again – with another song that probably would have been my next obsession – another song from the same era that they had only ever really teased in concert before (and only a couple of times, at that) – Breaktown.  I didn’t even get video from the beginning because it took me so long to process what was really happening in front of me when he started it.  Taylor also did a couple of songs solo that I thought were a little bit weird – You Never Know was weird in a GOOD way with him solo and Get The Girl Back was weird in a.. not so good way with just him doing it solo.  Taylor also did a ridiculous set of 15 songs.  I kind of thought it never was going to end and I think I would have been ok with that. 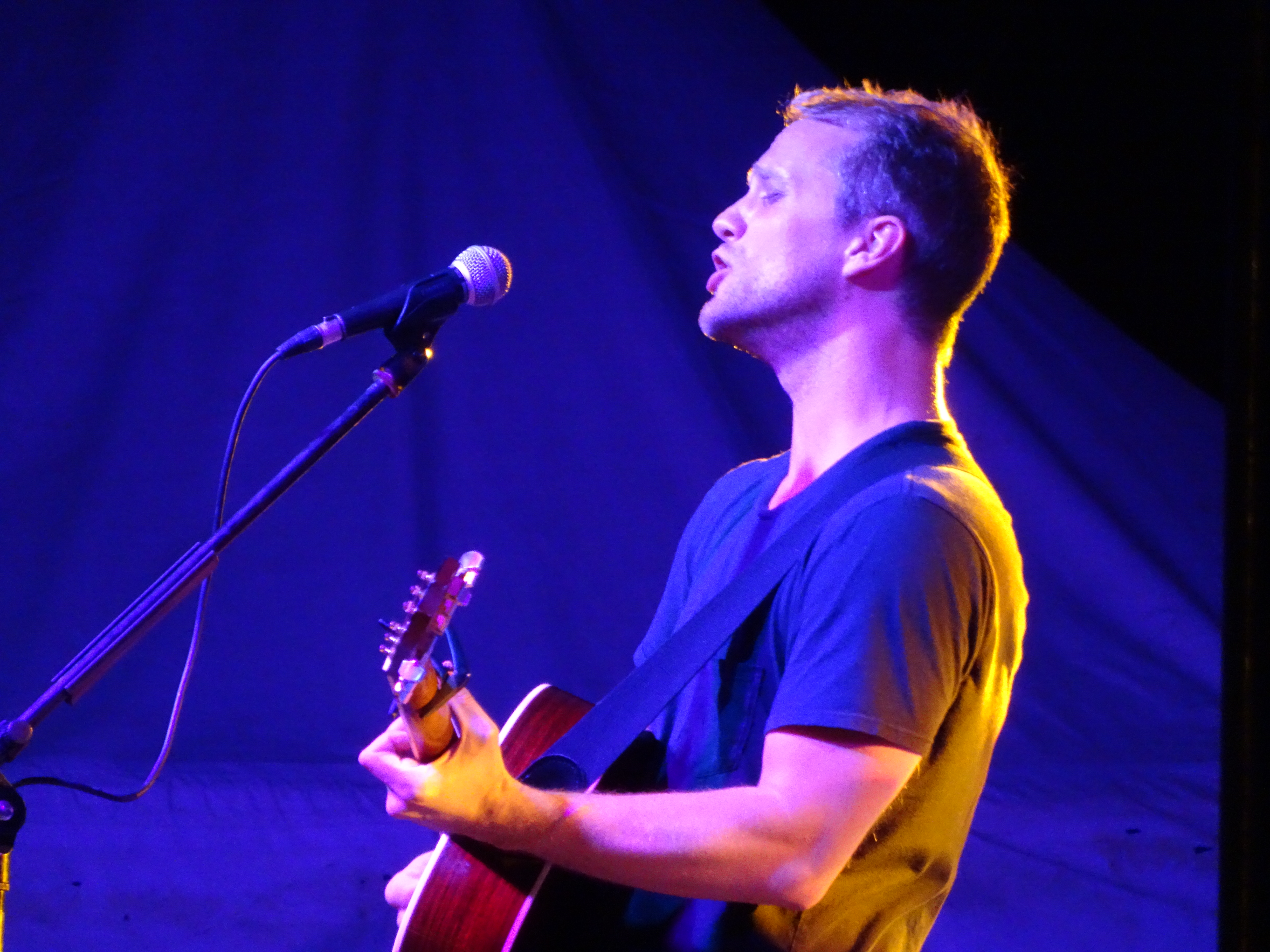 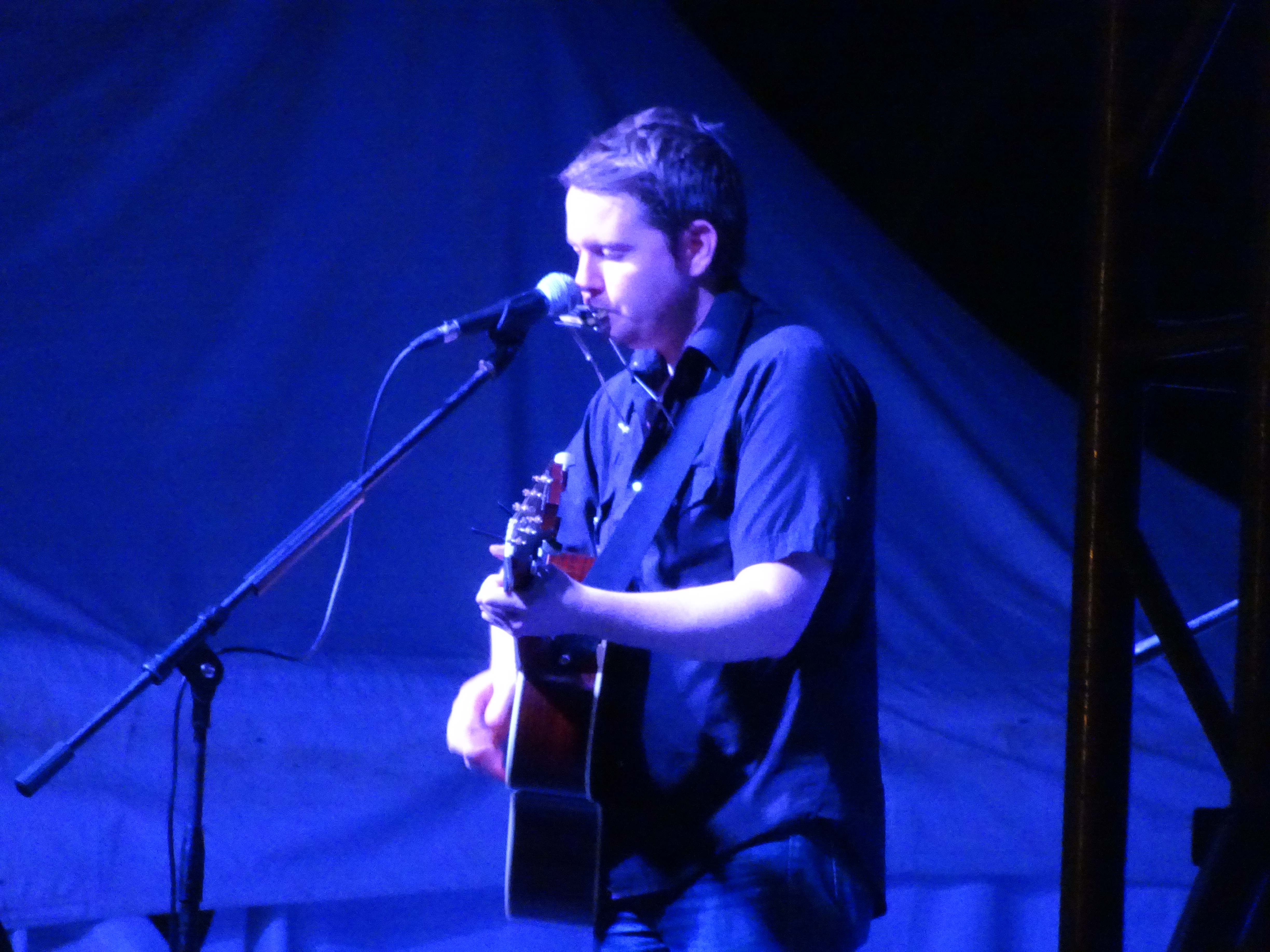 I was very excited for Andrew Ripp to be a guest at this BTTI.  I had seen him previously open for David Cook and chatted with him about Hanson after his set and I knew that he would be a fun time and was a lot of fun on stage and had a great voice.  I didn’t realize how awesome he would be throwing a setlist together on the spot while I laid in a beach chair looking up at the stars with the waves crashing behind me.  It was perfect!  Of course, then I got sick and after 1 of John Fullbright’s songs I ended up having to leave and missed the rest of his set.  He didn’t really grab me with his song and I could hear some of it from the room, at least.  But it seemed like Andrew Ripp won a LOT of people over and I hope he is in consideration to be an opening act on a future Hanson tour because even though he’s just a guy with a guitar he has ENERGY which is what so many of their openers seem to be lacking. 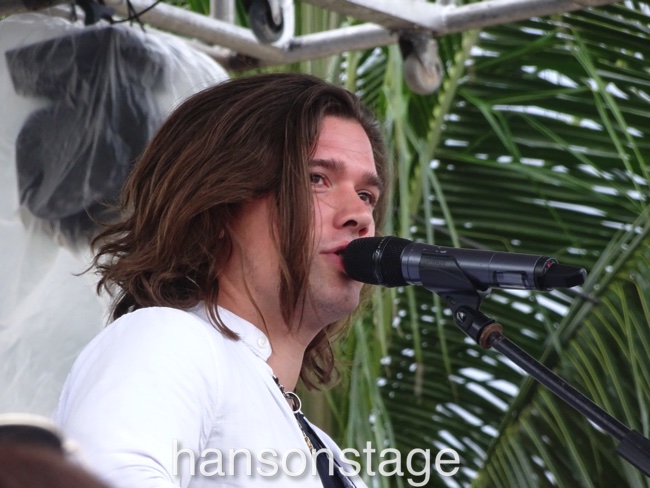 Zac’s solo set was probably my least favorite set. That’s not to say I didn’t like it, but I did have trouble getting in to it because a lot of the songs were about loss so I was just struggling with keeping it together for his set.  I did like that he told some background stories about the songs and what they were about because a lot of times they are so vague about those things.  He also did Juliet and Do You Believe In Love which are a couple of my favorite Zac leads, but even that couldn’t really redeem things for me.  He also didn’t give me any never before heard songs.  Sad face.  He is getting better and better at being on stage alone, I think though.  There’s definitely been an improvement since his first solo set back in 2014. 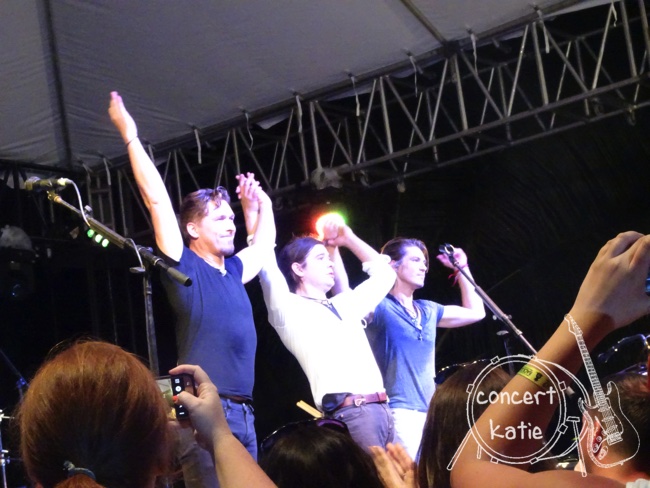 The last time they did a members only themed setlist was 2014 and I think that if you ask anyone who was there they will say it was one of their favorite Hanson shows ever, if not THE best.  I am not sure that it will ever be topped, but they did try with the setlist they put together for the final night.  A lot of the Members Only songs have never been played live before, but unfortunately only one such song made it into this setlist (Freak Out) and everything else I had heard.  They did end up doing I believe all from the “Sound of Light” EP which is probably one of my favorites of their members only EPs.  The show started out with no lights on the front of the stage being on – which was strange.  Then they were completely in the dark before the 3rd song so we turned our cell phone lights on them until things were fixed.  That was weird and I wasn’t sure why they had them go onstage if the lights were an issue, but I guess they had to somewhat keep things on time.  Feeling Alive on the beach was amazing – I love that song so much in general but just putting it in the beach setting brought it to a whole other level.  They seemed to be having trouble starting out with Roller Coaster Love and I’m not sure Isaac wanted to play it or remembered how to play it but they worked it out.  They finished the encore out with some album songs (singles) that hadn’t found their way into other sets.  We did see they skipped “Ive Got Soul” from the setlist, but no great loss there.  For the finale they brought up Andrew and John to sing Back to the Island and Andrew even did a rap (the lyrics were on the stage in front of him but either way, totally impressive) and then our 5th year at BTTI was over and only Taylor’s after party was left before we’d all have to head back to the real world.

I thought that this year had some really solid setlists and some really good performances.  Things seemed a bit more polished than last year and I am ready to fork over all my money for year 6.