Book Review: Saved by the Boats

July 1, 2016 by ConcertKatie No Comments 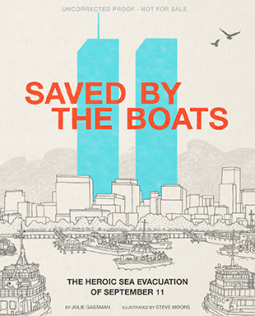 Saved by the Boats is considered a children’s book, but I learned a lot from it as well.  Everyone is aware of what happened in New York City on September 11, 2001.  I wasn’t aware of how the boats helped people get off the island.  I mean, it makes sense, but I don’t ever remember hearing any stories about the boats and I watched footage for days in the days after the attacks.  The author of this book, Julie Gassman, was one of those people who was in the city on September 11th and took one of the boats to New Jersey after the towers fell.  The descriptions are haunting and I can’t even imagine what it felt like to be there on that day.

September 11, 2001 was a black day in U.S. history. Amid the chaos, sea captains and crews raced by boat to the tragic Manhattan scene. Nearly 500,000 people on Manhattan Island were rescued that day in what would later be called the largest sea evacuation in history. In this rarely told story of heroism, we come to understand that in our darkest hours, people shine brightly as a beacon of hope.
For ages 6-10.
About the Author: The youngest in a family of nine children, Julie Gassman grew up in Howard, South Dakota. After college, she traded in small-town life for the world of magazine publishing in New York City. She now lives in southern Minnesota with her husband and their three children.
About the Illustrator: Steve Moors is a British/American artist living in New York. His work has appeared in numerous publications, including Time magazine, RollingStone, The New York Times, The Atlantic, and Boston Globe magazine. He was originally trained by Magnum Photos agency member David Hurn in documentary photography, later turning to illustration to satisfy his need for complete artistic autonomy. Steve has lived in Manhattan with his wife and two children since 2000. He was in Manhattan when the planes struck the Twin Towers on 9-11. He hopes this book will help explain to the younger generation both the tragedy and heroism that happened on that fateful sunny day.