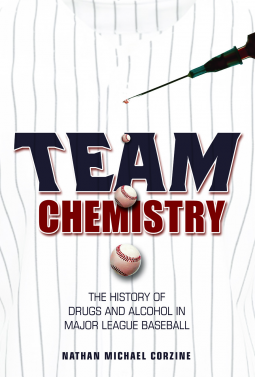 Team Chemistry talks all about the abuse of drugs and alcohol in baseball, from the past and the present.  It touches a bit on other sports as well, such as the NFL and bike racing.  Drinking has always been a problem, but it was not often written about by reporters. Tobacco is also an issue.  The book also talks about the evolution of drug use throughout the sport.  Certainly an interesting deeper look into the lives of some baseball players and their addictions as well as talk about the more recent steroid era and the Mitchell Report and its fall out throughout the sport.

In 2007, the Mitchell Report shocked traditionalists who were appalled that drugs had corrupted the “pure” game of baseball. Nathan Corzine rescues the story of baseball’s relationship with drugs from the sepia-toned tyranny of such myths. In Team Chemistry , he reveals a game splashed with spilled whiskey and tobacco stains from the day the first pitch was thrown. Indeed, throughout the game’s history, stars and scrubs alike partook of a pharmacopeia that helped them stay on the field and cope off of it: In 1889, Pud Galvin tried a testosterone-derived “elixir” to help him pile up some of his 646 complete games.Sandy Koufax needed Codeine and an anti-inflammatory used on horses to pitch through his late-career elbow woes.Players returning from World War II mainstreamed the use of the amphetamines they had used as servicemen.Vida Blue invited teammates to cocaine parties, Tim Raines used it to stay awake on the bench, and Will McEnaney snorted it between innings. Corzine also ventures outside the lines to show how authorities handled–or failed to handle–drug and alcohol problems, and how those problems both shaped and scarred the game. The result is an eye-opening look at what baseball’s relationship with substances legal and otherwise tells us about culture, society, and masculinity in America.

Nathan Michael Corzine is an instructor in history at Coastal Carolina Community College.