February 5, 2016 by ConcertKatie No Comments 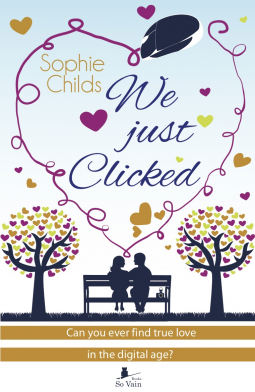 We Just Clicked is about Erin Cochrane. When we first meet her, she is planning her wedding to Tyson and lending an ear to her best friend Bex and hearing all about her adventures in online dating.  But then Tyson decides that he doesn’t want to marry Erin and he doesn’t even want to be with her anymore so she is forced to move out of his house and back in with her Mom.  Bex convinces Erin to make an online dating profile.

Erin goes on a few bad dates and a few really bad ones – like the one with the guy who took her to Pizza Hut and told her she could only drink tap water because he was treating and couldn’t afford drinks… and just when she decides that it is time to delete her account, she gets a message from a guy named Joe.

Joe is a photographer and Erin doesn’t realize he is a celebrity photographer at first and thinks he is just joking around when he mentions having worked with celebrities. The two really seem to hit it off, but with Joe away all the time for work and Erin reading gossip magazines she thinks that something may be going on with his ex and calls things off. But Erin’s Mom is convinced that they are meant to be and meddles a bit…

Definitely a fun read and I always like reading about others dating site horror stories (and I have a few of my own as well!)  This was my travel read and I don’t think I could have picked anything better.

Erin Cochrane loves the gossip and the countless bizarre stories about her best friend Bex’ adventures with online dating. Not that she’d ever sign up for the site herself. Erin’s far too busy planning her dream wedding to her gorgeous fiancé, Tyson.

But when Tyson decides that he is not ready for marriage, Erin’s world is turned upside down. Forced to move back in with her eccentric mother, things couldn’t get any worse. Thrust back into the singles’ scene, could online dating be the escape Erin needs from it all? Or will it be just another disaster?

From stalkers to cheapskates, Erin feels as though she’s become a magnet for every loser around, until she opens one message that changes everything.

An intriguing novel about modern dating and unexpected encounters that will keep you entertained right up to the very last page. 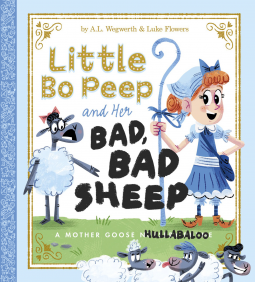 Little Bo Peep and Her Bad Bad Sheep is a Mother Goose Hullabaloo.  You see, while the narrator is trying to tell the story of Little Bo Peep and how she has lost her sheep, there are something like 40 other nursery rhymes all going on at the same time and things get a little hectic.  See if you can spot the other rhymes throughout the illustrations. There’s a guide at the end of the book just in case you’re not able to spot them all, with the rhymes included!

Little Bo Peep has lost her sheep…as usual. What starts out as a simple nursery rhyme quickly derails into mayhem. Bo Peep can’t find her sheep, but readers will, and they’ll be coaching Bo from the sidelines as they watch her mischievous sheep swiping mittens from kittens, toppling Humpty Dumpty, and trampling Mary’s garden. Dozens of beloved Mother Goose characters have cameos…and all have run-ins with the sheep. Readers will giggle all the way to the end when at last they can finish the rhyme, as the sheep (sheepishly) come home, wagging their tails, of course.
For ages 4-8.
*Cameos from more than 20 traditional nursery rhymes make appearances and all rhymes are included at the end *Lots for young readers to seek and find on every page *Silly humor just right for readers who will spot Bo’s sheep before she does 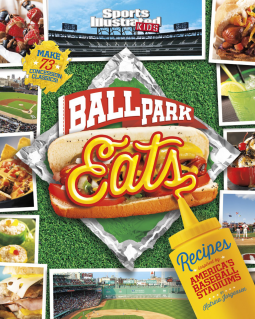 Ballpark Eats is put together by Sports Illustrated for Kids. It features a few items available at each of the major league ball parks – but unlike other books it also has recipes so you can make them yourself without having to go to the ballpark! This is great news for me because the Peanut Butter Cup Fudge at the Pittsburgh Pirates games looks delicious – but is about 8 hours from me so I’m not sure I’ll ever make it to a game there.

A great book to learn about the ballparks and what kinds of foods they have at the stadiums!

Forget peanuts and Cracker Jacks! America’s Ballparks now offer a dizzying array of edible options. These make-like stadium recipes give young chefs and sports fans a culinary road trip at home. From the famous fish tacos at the Giants’s AT&T Park in San Francisco to the mouthwatering Cuban sandwich at the Tampa Bay Rays’s Tropicana Field, these diamond dishes are perfect for any seventh-inning stretch. Produced in partnership with Sports Illustrated Kids.
For ages 10-13.
*Written by Katrina Jorgensen, a graduate of Le Cordon Bleu College of Culinary Arts *Make-like recipes from 30 Major League baseball stadiums, including famous fish tacos at the Giants’ AT&T Park in San Francisco to the mouthmateringCuban sandwich at the Tampa Bay Ray’s Tropicana Field *Created in collaboration with Sports Illustrated Kids *Perfect for baseball fans or food fans—or both! *Great family book for kids and parents to experience together