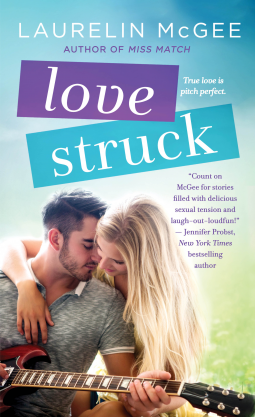 Love Struck was one of those books that I got so into, I couldn’t quite get back into reality after I finished it.  This book had no write up on NetGalley when I chose to review it, I simply picked it because the cover had a guy holding a guitar on it and you all know I like to read and review music related books.  This was a case where judging the book by its cover worked out for me.

Love Struck starts out where we meet Lacy.  She works in a recording studio and is trying to record a new album but has not been able to write a song in over a year.  Still haunted by her fiance’s death, she is trying to find anything that can help her get out of this funk and she seems to find it in a group called Song Writers Anonymous or SoWriAn.  To keep thinks anonymous, everyone on the site knows her only as LoveCoda.  She has been chatting with a guy named FolxNotDead## (I think it was either 27 or 24 or perhaps both were mentioned in the book) and he has been sharing songs with her and she has been helping him improve them.  Folx’s band gets booked to go on a tour so they think that their time together will be few and far between, but they decide to meet on December 24th and Lacy’s sister’s wedding where Folx will be her date.

Meanwhile, one of Lacy’s coworkers books Lacy on a tour with The Blue Hills.  Love tells Folx that she is also going on tour but they agree to keep in touch.  Since things on the site are supposed to be anonymous, neither one of them tells each other where the tour is going, what the bands are, etc.

So it is no surprise when it turns out that Folx is one of the members of the band that Lacy is touring with.  She immediately hits if off with one of the guys in the band – Eli.  I mean, they really hit it off.  And Lacy is able to write a song for the first time in a year!  Then she over hears the band singing a song that she knows the lyrics to – but they had never performed it on tour yet.  It is one of Folx’s songs and she becomes convinced that the lead singer, Jax, has to be Folx and is torn because she is really starting to like Eli.

Of course, it seems like the two are never going to figure out that they are in love with each other in real life AND online because Jax lies and says that he writes all the bands songs, when it really is Eli.

A rather unfortunate accident near the end of the book makes it seem like Eli and Lacy won’t end up with their happily ever after.  They say if you love someone, let them go… but will these two be able to find a way back to each other in the end?

SHE’S GETTING INTO THE GROOVE
Lacy Dawson is a young singer-songwriter with a record deal, a studio gig, and a serious case of writer’s block. After looking for love songs in all the wrong places, she finds inspiration at an online support group called Song Writers Anonymous. Thanks to one mysterious member who motivates her and inspires her, Lacy’s career is back on track. But is she ready to meet her sexy musical muse…face to face?

HE MAKES HER HEART SKIP A BEAT
Eli is definitely interested in hooking up with Lacy, aka “LoveCoda.” But between writing her new album and his band’s success, they can’t find the time to face the music-or each other-about their burgeoning online romance. All that changes when Eli and Lucy get booked on tour together. In person, the attraction is all too real and explosive. They both should walk away, but once they are in each other’s arms, there is no turning back…