January 29, 2016 by ConcertKatie No Comments 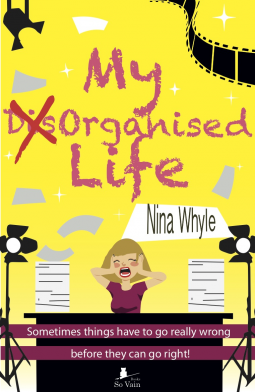 My DisOrganised Life is about Eve.  We first meet Eve when she is getting arrested and trying to get out of it by dancing all up on a police officer after starting a fight with her cheating ex and his new girlfriend.  Of course, someone in the bar records the incident on video and she becomes a viral sensation on her college campus.

Eve is all about lists and ends up putting together a list of things to do in her twenties.  She has a new boyfriend, they are living together and she is on her way to working the things off of her list one by one.  When the TV show she is working on doesn’t do proper background checks on a couple that is supposed to be participating, somehow it ends up as Eve’s fault.  She thinks that her boyfriend, Adam (yes, Adam and Eve) is close to proposing and in an effort to save her job agrees that they will go on the show as the final pair of contestants. But when the proposal goes horribly wrong, Eve gives Adam the space he says he wants but then decides that she never really loved him.

The rest of the book kind of goes back and forth between the ridiculous reality TV show that Eve is working on and her personal life.  She seems to be crushing on one of her coworkers but isn’t sure if he is into her too or if she is just imagining it.

Eve is a fun character and I loved reading all her ridiculous lists and all the expectations she had for herself, as well as cheering her on when she was able to cross some items off the list.  This was a fun book to read because Eve got herself in some interesting predicaments.

A viral video of drunkenness and vomiting over a policeman is the stuff of nightmares, and so is living back home with your religious, nutty parents. Fed up with life not going her way and turning quietly insane, Eve Poots comes up with a plan. Well more of a list of “things to do while she’s still twenty-something”.

Six months later, and the list is working its power: she is now living with her new boyfriend, junior doctor Adam, and working as an assistant to TV producer Alastair on a reality show – life really is on the up.

But then it all starts to crumble and she soon realises that what the list should have really said was:

Has her life suddenly turned into a TV melodrama of its own?