November 11, 2015 by ConcertKatie No Comments

Friday night David Cook played a sold out show at Infinity Hall in Norfolk, CT.  I had purchased a M&G package which allowed me to meet David before the show, get something signed, get a photo with him as well as get a copy of his new CD, Digital Vein.  Since David is a big Royals fan and I’m a big Mets fan, we talked about the World Series and he said he was trying to keep his mouth shut for the next couple of shows (Saturday night was NYC) but that he was glad he could go back to liking the Mets now because he did like them. (Just not as much as the Royals) He also said if the Mets could keep their pitching for a while they’ll be really good… and get some bullpen help.  I agreed.

After the M&G we could either stay upstairs at our seats or head back downstairs. I opted to stay in my 2nd row seat and had forgotton how tight the seats were.  My knees were practically touching the row in front of me! Andrew Ripp was the opener and didn’t come out until sometime after 8.  He has a Hanson connection and I was going to talk to him about it after the show either way – but then he decided to tell a story about David.  Which started out with “I flew to Tulsa, OK… to write songs with Hanson” I, of course, cheered, but then he had to say “You know. Hanson, MMMBop?” and proceeded to butcher the chorus. The story continued that on his flight back home to LA, some guy came and sat in the middle seat next to him with a sandwich (and he didn’t like people who brought on food that smelled because he was always hungry) and that guy was David Cook.  They talked and found out they were both musicians and David told Andrew he was heading out to LA to cut a record.  2 weeks later, Andrew turns on American Idol and there is David… and he figured out that he lied to him the whole flight to LA and Andrew believed everything he said.  But he was going out there to audition for Idol and couldn’t say anything!  Andrew’s set was really good and after the show I bought all of his CDs and talked to him about Hanson.  He said writing with them was “awesome” and that he really does like them and they are really great guys.  Then he asked if I had a Hanson bumper sticker and I said I did it said “I <3 Hanson” and my car was parked right outside. He laughed and ended up writing “I <3 Hanson too!!!!” on my autograph. ha.

David was on around 9pm.  His set was a lot shorter than I was expecting it to be, but was still great.  He talked about how his new album was out and that some of the songs would be new if you didn’t yet have the CD.  (I failed and had intended to listen to it a few times before going to the show to brush up on my lyrics and never did!) Before the 4th song he said it would be new if you weren’t familiar with the CD – but then the drums kicked in and David kind of made a face and then they went into the song “Heroes” which was not a new song.  I just kind of shrugged it off until after the song David went on about his professional band and how his professional drummer started playing the wrong song and the rest of his professional band followed right along.

After that he asked what guys were there because their significant others made them come along.  He decided it was time to play something for the guys and did Led Zeppelin’s Rock and Roll and Whole Lotta Love. (Sorry Dave, ZHan does it better)  After he finished the next song, Declaration, he said he had to make a note to not do that one back to back with Zeppelin.

The backdrop at Infinity Hall has a bunch of lights on it that they can make twinkle and blink along to the music and David commented that if anyone had been to Disney it reminded him of the Tower of Terror.  He also spotted a sign in the audience a little girl had that said “WE LOVE DAVID COOK” 4x on it.  He asked if he could have it to put it up on stage with him for the show, and then laughed and said it “got sinister” when he realized she put her phone number on it!  He said he was still going to put it on stage but if anyone prank called Hannah.. “I swear to god…”  At the end of the show he called her back up front and autographed the sign and gave it back to her.

During the encore, he talked a bit about how everyone’s faces are always covered by a giant cell phone during his sets and he wanted us to just have a moment. He asked for everyone to put their phones and cameras in their pockets or purses so we could have a moment and how he has gone to a lot of concerts and doesn’t have any pictures and he’s ok with that. Because he has the memories of the moments.  (Sorry David, I like the memories AND the scrapbook pages – but had no problem with his request for putting everything down for just one song) 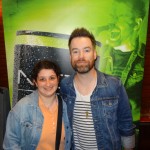 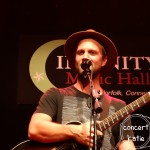 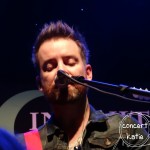 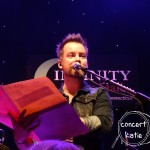 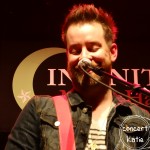 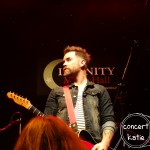 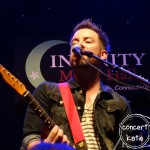 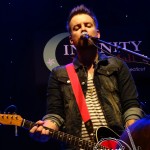 Better Than Me
Light On
Criminals