November 20, 2015 by ConcertKatie No Comments 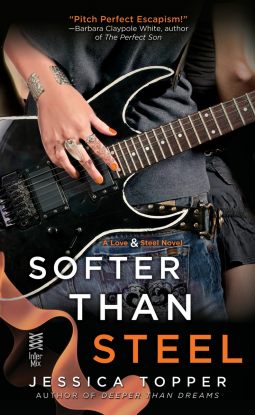 Softer Than Steel is the 2nd book in a series, however I didn’t realize this until after I finished the book so it works as a stand alone as well! The book is about rock star Rick “Riff Rotten” Rottenberg and yoga instructor Sidra Sullivan.  The two meet when Sidra is doing a bagel delivery to help out the shop her brother works at after he forgets part of an order and Sidra loses her flip flop.  Rick has his driver take her to a shoe store to buy her a new pair of shoes, even though Sidra would be perfectly happy with a cheapo pair from the drugstore.  When Rick tries to find out where Sidra was dropped off, there ends up being a mix up with why he was interested in the building (that Sidra’s uncle is trying to sell) and that of course causes for some drama.  Sidra and Rick’s path ends up crossing again, when Rick shows up at a  Yoga lesson at NYU that Sidra’s friend is teaching.  Her friend suggests Rick go to Sidra’s beginner yoga class and that’s where the relationship starts to blossom.  But of course it is not without its misunderstandings and drama.

I liked this book, there are a lot of cool coincidences and intertwining of characters throughout the book and there is just enough drama and trouble with Rick and Sidra’s relationship to make you wonder how they may end up.  I will certainly be open to reading other books in this series and maybe going back to reading the first when I find the time!

From the author of Deeper than Dreams and the Much “I Do” About Nothing novels, a story that proves that you have to find yourself before you can find love…

As a rock star “Riff Rotten” Rick Rottenberg has enjoyed all the perks that fame can offer, especially now that he’s reunited with his former band mate, Adrian “Digger” Graves. But despite his success, Rick is a mess. Still reeling from the death of his wife years ago and terrified his demons will end his career, he agrees to seek help for his anxiety.

Burned by a musician in the past, Sidra Sullivan has closed her heart to love. So when Rick walks into her yoga studio, she wants nothing to do with him—until the bad boy shows an unexpected soft side.

As Sidra and Rick work through their painful pasts, they realize just how strongly opposites can attract. But when a crisis threatens the delicate balance they’ve forged, they’ll discover if their love is strong enough to weather another storm or just too broken to survive…