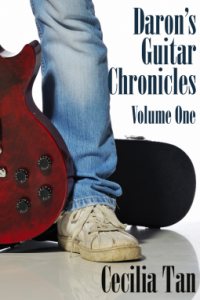 Daron is 19, plays guitar and is on tour.  He’s a bit of a prodigy and has been playing since he was a kid. It’s the 1980s. Things were a bit simpler then – no phone for his Dad to track him down on… but at the same time things weren’t as simple. Daron is in the closet. Volume 1 chronicles the beginning of his career – writing songs, playing guitar, helping out on a tour.  I have Volume 2 to read next, and I’m glad because 1 did end with a cliffhanger of sorts when it comes to the rest of Daron’s career.

Sex, drugs, and rock and roll. Coming out and coming of age in the days of AIDS, MTV, Reaganomics, and Just Say No.

Daron Marks is a young guitar player with a dream, make it big like the guys he grew up idolizing in New Jersey–or at least escape his dysfunctional family. He makes it as far as music school in Rhode Island, and the rock clubs of Boston beckon him. But it’s hard to succeed from the closet.