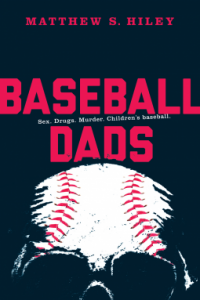 From the beginning of the book, when the author wrote a note that if you are easily offended you should shove the book up your anus, I knew I was about to be taken on a wild ride.  And that I was.

Baseball Dads tells the story of 4 guys who became friends because their kids all play on the same little league team together.  Now they hang out and golf and do drugs and talk about their sexcapades.

What starts with someone seeing the umpire kill a guy and trying to black mail him into talking some sense into the kids baseball coach so they stop playing “daddy baseball” (where the kids get to play where their suck up parents want them to play, regardless of how good they are) and start playing “winning baseball” (you know, where you play ball to win) ends up with a death count that I lost track of after, oh, nine.

Things got so crazy at times I was expecting the main character Dwayne to wake up and realize it was all just a bad trip and none of it really happened.  But instead of that happening… things just get more and more ridiculous.

I can’t really talk too much about it for fear I am giving too much away but if you love serial killers like Dexter, are familiar with little league baseball (maybe because you’ve been involved with it – as a coach, parent or in my case, working the concessions) and are looking for something fun to read – this is it.  (If you’re not into reading about murder and drugs and sex and other offensive thingsthen I would say this is NOT the book for you, hence the author’s note in the beginning of the book)

Dwayne Devero is just like you and me, except he simply doesn’t give a s**t any more. He’s had enough. He’s done with people living life wrong. You’ll do it right, or he’ll bury you under the bases at the ballpark where he coaches. It’s just that simple.

Tired of poor decisions being made all around him, from the politics of player positions on his son’s little league baseball team to the philandering of his wife in his own bedroom, Dwayne decides that breaking is better than bending. What follows is a wild ride full of carnage and revenge, led by a man who will stop at absolutely nothing to bring honor back to his family, his community… and children’s baseball.

Baseball Dads is a pitch black comedy in which one man takes on the duty of bludgeoning honor back into a sometimes dishonorable world.