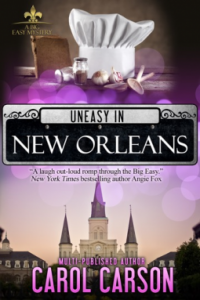 I picked this book because I was going to be going on a trip to New Orleans. And then it ended up getting scheduled to be posted when I am there.  Although, after reading it I think I maybe should have waited until I got home to start it 😉

Uneasy in New Orleans is about Finn Jones.  The book starts while Finn is giving one of her walking tours of New Orleans and the cemeteries and haunted houses.  She spots of dead body. And then it disappeared. And where she saw it, a voodoo doll appears that seems to be in Finn’s likeness.  Fortunately, her good friend Jack is a detective. But she is of course in the middle of the investigation now.  Jack’s brother Tommy is a PI and Finn has been taking some photos for him.  She ends up realizing that one of the women that she had just taken photos of is on the FBIs most wanted list and ends up getting kidnapped by her.  And the guy she was in the photos with is after her as well.

Finn seems to find trouble wherever she turns. And her younger sister is living with her for the time being and she ends up trying to hook up with the neighbor boy while Finn is out.  Meanwhile, Finn is also trying to go to culinary school and keeping it a secret from everyone because she is worried that her family will think she is a failure that can’t finish anything.  Then she ends up getting suspended from the class…

New Orleans seems to be a great backdrop for this story what with the voodoo and the curses that seem to be going on around Finn. Or to Finn.  A lot of action and a bit of mystery, this was a great read.

FINNIGAN JONES HAS A PASSION FOR COOKING AND A PENCHANT FOR TROUBLE.

Dead bodies aren’t on Finn’s New Orleans walking tour of cemeteries and haunted houses. Ditto disappearing bodies. Now she has to explain to Detective Jack Boyle how her missing corpse has turned up in the Mississippi putting her smack-dab in the middle of a murder investigation.

Unfortunately, another of Finn’s odd jobs is taking questionable photos for Jack’s PI brother, Tommy. After she snaps shots of a dubious pair of lovebirds, they stalk her, then kidnap her. Now Finn’s dealing with two lunatics intent on killing her. Or driving her crazy. She’s not sure which.

All Finn wants is to survive school and become the best chef in the world.

FINN’S LIFE IS ABOUT TO GET EVEN MORE COMPLICATED.