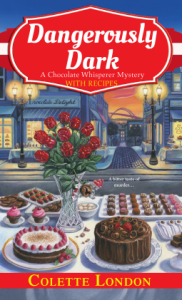 Dangerously Dark is the second book in a series. I had previously read the first, Criminal Confections. The third, The Semisweet Hereafter is coming soon. After reading the first I wasn’t sure I wanted to continue with the series, but figured I’d give it another chance. Unfortunately it still fell flat for me.

In this book, Hayden is supposed to go meet her financial advisor whom she has a crush on based just on his voice.  But he ends up reminding her that instead she needs to go to Portland for her friend Carissa’s engagement party.  Then Carissa’s fiancé turns up dead. Everyone seems to think it was an accident, but since Hayden seems to stumble upon murders as a hobby now, she thinks he has been murdered and is trying to solve it.

Once again, I didn’t really like how everything just went along as normal in the book when people were dead. Although, I guess if you think it was an accident there’s no investigation needed… unless you’re Hayden.

Not sure I’ll stick around for book 3 in this series.

Chocolate-whisperer Hayden Mundy Moore has just arrived in Portland, Oregon, where she’s about to scarf soufflés and sip cacao-based cocktails at her friend’s engagement party. Fresh from nabbing her first candy-covered killer, the last thing Hayden wants to do is mix her love of chocolate with criminal mischief again. But then the groom-to-be turns up dead before beginning his renowned Chocolate-After-Dark tour. . .

Hayden’s friends insist that Declan’s death was a freak accident, but she knows there’s no mistaking the bitter aftertaste of homicide. In the midst of habañero hot chocolate and mocha-chunk gelato, a choco-crazed killer waits to strike again. Hayden will need to use more than her extraordinarily gifted taste buds to bring this murderer to justice, but she just might have bitten off more than she can chew in the process.