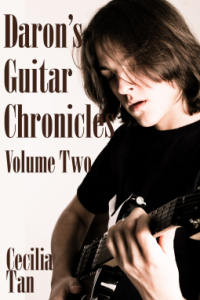 Volume 2 of the guitar chronicles was about twice as long as volume 1. But I kind of liked it better that way (once I got over the fact that it meant it was over 400 pages).  I seemed to get hooked on this book a lot faster than the first and felt more immersed in the story.  I felt like I was sitting around with Daron and he was telling me this story about how his band was on the verge of getting signed, they had a new singer and found a drummer and they were on tour… and everything that comes along with it.  Once the band gets signed things really start moving, Daron is hooking up with the lead singer but doesn’t want the rest of the band to know that he is and isn’t sure that Ziggy can keep his secret.  But then their relationship seems to be losing their on stage chemistry and messing with Daron a bit.  Daron’s Dad comes back in the picture and although the 1st book had Daron trying to avoid him at all costs, he ends up hiring him to help out the band this time.  It was fun to follow the ride of M3 and everything behind the scenes from Daron’s point of view.  This book didn’t end with quite as much of a cliffhanger, but Volume 3 is out there and I am looking forward to getting back into Daron’s world some day soon!

It’s the summer of 1987, and Daron Marks is trying to make it big. His band is starting to attract attention from major labels, which is good, but his own attention too often strays to the band’s lead singer, Ziggy. Daron already struggles with being gay, he doesn’t need a relationship with a band member to make things worse. He resolves to keep his crush a secret. But nothing stays a secret for very long in the white-hot spotlight of fame.

Volume 2 of Daron’s Guitar Chronicles encompasses over 80 chapters of the popular online serial (over 300 book pages), the most tumultuous year of Daron’s life yet.