Music Monday: You + Me rose ave.

July 6, 2015 by ConcertKatie No Comments 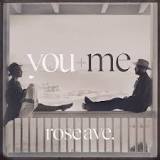 
rose ave is the debut album from You + Me which is made up of Dallas Green and Alecia Moore – most commonly known as P!nk.  I actually didn’t know anything about this CD, but my mom saw Pink on Ellen or some other show talking about it and so she asked for it for Mother’s Day.  It came out in October 2014.  If you’re used to Pink albums, this one is a lot more mellow than what you might be expecting, but her voice is beautiful and and it is a nice change of pace.  Dallas and Pinks voices really sound absolutely wonderful together which is what makes this CD so wonderful.  This CD was recorded almost entirely in one week. Dallas and Pink had thought about collaborating and decided to sit down and see what would happen – they had bits of the album written and booked a studio just in case. Next thing you know – they had an album!  It must have been meant to be.