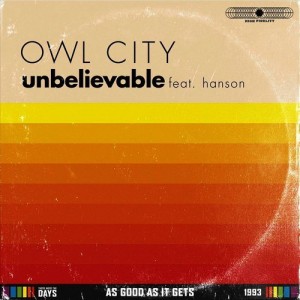 Although Owl City’s album came out just a few days ago (July 10) today I am just focusing on the single “Unbelievable”.  I’m not really a fan of owl city’s style with the distortion of singing so I’m not sure I’ll bother to review the whole album, but since this track features Hanson I had to mention it.  Though only Isaac gets a songwriting credit on the song, all 3 Hanson’s have a couple lines in the song.

The whistling in the song reminds me a lot of Owl City’s song “Good Time” which he did with Carly Rae Jepsen (who opened for Hanson on their Canadian tour a while back… 6 degrees of Hanson!) I love all the 90s references since I am most definitely a 90s kid.  I think the song is cute.  They even made an animated video for the song – I love the sticker the VHS has at the end! 😉