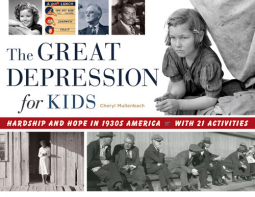 American history before and after the Wall Street Crash of 1929

Providing a balanced, realistic picture of a time rife with hardships, The Great Depression for Kids brings the era and key concepts to life. Kids learn about the harsh realities that most Americans could not escape, such as massive unemployment, natural disasters, and economic collapse. They also learn that the 1930s were a time when neighbors helped neighbors; sports figures behaved admirably; and an army of young men rebuilt the nation’s forests, roads, and parks. Librarians delivered books on horseback, a curly-haired child star charmed moviegoers to “stand up and cheer” in the darkest of days, and a little African American girl became the first of her race to participate in the National Spelling Bee. Beginning with an in-depth look at the 1920s, the book builds readers’ background knowledge to help set the stage for the decline of the economy over the next decade. Twenty-one crosscurricular activities help kids learn how to research, buy, and sell stocks; use scientific methods to conduct a survey, re-create Depression glassware; and much more.