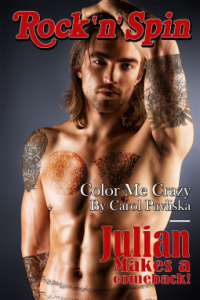 Color Me Crazy is about Julian, a former rockstar who is now running a studio. He is “crazy” in that he sees colors for sounds. His sister ends up introducing him to her friend Cleo, who has lost her job and is getting evicted. Julian decides to hire her to manage his studio and live in the apartment upstairs with him. (She has her own room.)  But there is something about Cleo’s tangerine scent and orange color that isn’t letting Julian stay away from her like he said he would.

Cleo has dated several rock stars in her day, she used to follow bands around as a groupie in her teens but has decided this time she’s keeping things professional, even if Julian does play guitar.

For a while Julian is keeping his true identity a secret, his professional last name and private last name are different.  Once Cleo finds out who he really is she wonders why he wanted to keep it a secret.  Julian comes clean about his synesthesia, his time on the road and his heroin addiction.  Cleo realizes that he isn’t like that anymore and is recovering and the two start a romance.

Things seem to be going well, that is, until Julian decides to go on the road with another band.

There were several times in this book when I thought things were going to take a turn for the worse, and I am glad that they didn’t.  When I was about 100 pages to the end of the book, I had to take a break because my idea of what the ending was going to be was awful and I didn’t want to continue reading if what I thought would be the ending was the ending. Fortunately the author still had several twists and turns in the story and I was pleased with the outcome of everything.  This book was a bit of a roller coaster ride, which I think is why I liked it so much!

About the Book
Never fall for a rockstar…

Julian Wheaton views the world through a kaleidoscope of synesthesia, seeing the colors of every sound he hears. His life as an iconic rock guitarist was a stressful psychedelic trip that nearly destroyed him. Now he’s abandoned the rock ’n’ roll lifestyle for the peaceful sanctity of his recording studio, but when fiery Cleo Compton comes to work for him, she brings chaos with her.

Cleo Compton has had her flings with rockstars—and it’s left her wary and bruised. Julian may have those sexy bedroom eyes and drool-worthy tattoos, but Cleo is determined to keep things strictly professional—until Julian turns out to be every dream she’s ever chased. When he risks it all to hit the road with a band again, Cleo fears he’ll return as the one thing she can no longer abide—a rockstar.