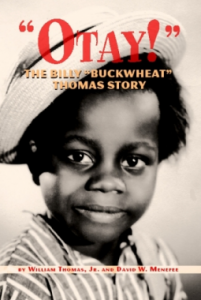 Otay! The Billy “Buckwheat” Thomas Story is written by Billy’s son, Bill Jr.  Billy is most well known for his role as Buckwheat in The Little Rascals / Our Gang.  This book is rather short, but I think it covers Billy’s rise to fame in the Rascals as well as the problems he found adjusting to normal life once he was too old to be part of the gang anymore.

There are also a lot of great photos throughout the book of the gang and on set as well as Billy as he grew up and joined the Army and had a family.

A biography by his son!

William Thomas, the man known as “Buckwheat,” one of the most beloved characters in the history of the Our Gang andLittle Rascals films, rose from obscurity to become an American icon. Billy’s heritage grew to be more than the ninety-three comedies in which he appeared as Buckwheat. He was a husband, father, and soldier. Several generations have come to know Buckwheat as if he was a real person, but few knew Billy, the man behind the myth.

In “Otay!” The Billy “Buckwheat” Thomas Story, William Thomas, Jr., Billy’s son, joins with acclaimed author David W. Menefee to brush back the sands of time and unearth the facts beneath the fable. For the first time, the true story is told how producer Hal Roach, Sr. plucked three-year-old Billy from hundreds of children and raised him on a pedestal before an adoring public. For a decade, Billy was the most prominent Black American in motion pictures, but World War Two brought an end to the famous comedy series and a halt to his film career. Billy went on to live a private, nearly normal life, married, fathered an adorable child, and then answered the call to arms and enlisted in the US Army during the Korean War. Years later, imposters attempted to steal his limelight, but Billy forgave the offense with his characteristic, childlike good humor.

In an era when most Black American actors were struggling to gain a foothold in Hollywood, Billy achieved a lasting legacy. Enjoy the timeless tale of a baby superstar, who once shown brightly on movie screens during Hollywood’s “Golden Years” and still fascinates audiences today.