Book Review: How To Survive Middle School and Monster Bots

December 10, 2014 by ConcertKatie No Comments 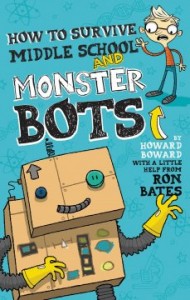 How To Survive Middle School and Monster Bots is about Howard Bower, a middle school student who is pretty smart and therefore not all that popular.  Howard finds out about a robot building contest that the Believer Achievers (BAs) are participating in and he wants to get involved.  He creates a robot out of a beloved Snowman his family has – called Mr. Jolly – that is supposed to hug people. He also is convinced that his partner on a project, Trevor, is actually part Android because he saw him remove part of his head in the bathroom. After Mr. Jolly doesn’t seem to be working out, Howard creates a new robot, Monster, that likes to dance.

Somehow – Monster keeps multiplying and creating new robots. There are also vandals on the loose smashing things in the neighborhoods and Howard starts to realize that this may be the robots! He has to figure out what he needs to do to catch all the robots and get them to turn off so they can stop wreaking havoc on the neighborhood.

I thought this was a cute book for kids, the robots multiplying was a bit far fetched – but the lessons in the book about being a team player and not caring if you win or lose and it’s better to help others among others throughout the book were really great.

It’s been a rough winter for Howard Boward, science genius. Not only is he caught in the crossfire of winter’s most dangerous weapon (snowballs), his best friend, Winnie McKinney, is mad at him, and the school bullies seem to have made it their personal mission to make life at Dolley Madison Middle School miserable. But when Howard’s teacher tells him about the upcoming robot-building contest, Howard can’t resist using his superior knowledge of science to gain an advantage, especially since he’ll be competing against archrival Gerald “G-Force” Forster. Unfortunately, the secret goo he uses to make his cardboard robot move turns it into a multiplying, vengeance-seeking monster. If Howard doesn’t stop the robot rebellion in time, they’ll ruin everything—including his friendships and the school dance.