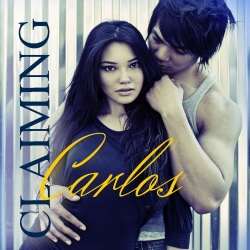 I have read, reviewed and enjoyed several of Rachelle Ayala’s books since I’ve started doing book reviews and Claiming Carlos was no exception.  This book is about Choco who is Evie’s sister from her book Taming Romeo which I have previously reviewed. Her parents own a restaurant and she is best friends with the cook, Carlos, who also happens to be the son of her godmother.  They live in the same apartment complex and Carlos has the job of escorting Choco to work every day.  Except that now this hotshot restaurant consultant has come to town and is trying to change everything about Choco’s family’s restaurant – and now he, Johnny Dee, is the one escorting her to work.

Choco ends up fixing up Carlos with her cousin Julia who is upset because her fiance left her. (And we can probably guess how well this relationship will work out – especially since it seems like Carlos and Choco are into each other but won’t act on it.)  Johnny takes Choco on a shopping spree and she gets a makeover which hides her freckles.  Johnny also tries to switch up the menu on Carlos and he is not happy about any of it.  Carlos and Julia decide to stage a fake engagement so that Julia’s ex will get jealous and hopefully want her back.  Meanwhile, there is all sorts of other drama going on like Carlos’ mother not believing that Choco is good enough for her son because she had a daughter as a teen that she gave up for adoption – but that she still spends time with as a “big sister” as part of their adoption deal.

There’s a lot more going on too but I feel like me writing about it doesn’t do it justice. It actually flows and makes a lot more sense in the book than how I am explaining it, I assure you!  I really liked this book, it was a fun and quick read with great characters and great storylines!

Claiming Carlos is a fun, light-hearted romance with a love triangle, family problems, and recipe disasters. Can Choco survive her deeply religious godmother while struggling to find herself between two eligible bachelors?

Choco Sanchez is stuck in a rut. She’s never hit a softball and has been friends forever with Carlos Lopez, the head cook at her family’s Filipino restaurant. When flashy restaurant consultant Johnny Dee hits her with a pitch, she falls head over heels and gets a makeover.

Carlos Lopez is not about to lose one for the home team. When Johnny launches a full scale change on the menu, Carlos sends him straight into the dumpster. Claiming Choco’s heart proves more difficult, especially when her secrets threaten to doom their love.