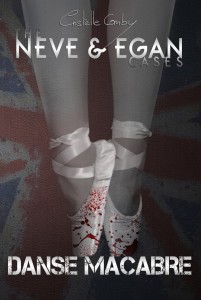 Danse Macabre is an Neve and Egan mystery novel. They are hired by a mother whose daughter has disappeared. The police seem to be sure that she just ran off, but that doesn’t seem to be the case.  Our PIs decide that this disappearance may be in connection with 2 other killings that have happened recently.  The two do some digging and seem to figure out the link between the girls who are missing and where they turn up dead.   They find her – but are an hour or so too late and this really messes with Lexa.

With a serial killer still on the loose, Lexa and Ash are determined to figure out what is going on, although the police don’t really seem to want them butting in.  Ash’s apartment is even broken into and a note left for him to stop looking.

I can’t really say what happens next, because I don’t want to give away the whole book! But it was very easy to just dive right in to this book and investigate along with these PIs. And be annoyed with how the police keep seeming to miss things and lie about their investigation.

There was a BIG twist at the end and I kind of need to know what happened and soon!

I received a free e-copy of this book in order to participate in the blog tour and write this review. I was not otherwise  compensated.

Enter below to win $25 to Amazon or PayPal cash!

Private investigators Alexandra Neve and Ashford Egan are hired to succeed where the police have failed, to safely return home a missing ballerina. With no lead to pursue and no idea who could be behind the young woman’s kidnapping, they soon find themselves at a loss as to what to do.

To make matters worse, the heart of England seems to be caught in the middle of a little Ice Age. With snow endlessly falling and Tube lines either too cramped up to use or out of service, it is a pain to do any legwork in the huge metropolis.

Oh, and because trouble never comes alone, there may also be a serial killer on the loose in the streets of East London…

Danse Macabre is her third new-adult novel, and she’s hard at work on the next titles in the Neve & Egan series.