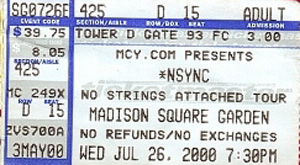 I think I remember more about trying to get these tickets than the actual show LOL  Me and 2 of my brother’s friends Moms went to “camp out” for tickets at the mall. (This was before ticketmaster.com was a thing)  They gave out numbers and then called a number and that was the first person to buy tickets and then everything went in number order from there (so getting there the earliest didn’t really mean anything)  Except that the shows sold out in like 2 seconds.  They added a couple more shows – but we ultimately went home empty handed.  MEANWHILE – my Dad was at home trying on the phone and was instructed to get us 8 tickets if he could get through.  He did – but the phone was having a glitch and was not giving out confirmation numbers.  So I got home and he was like “I GOT THEM!” (no cell phones lol) and I had heard other people in line talking about no confirmation number meaning you wouldn’t get them so I was like “did you get a confirmation number?” and he was like “No…”  But then one night a little bit later Ticketmaster called and said the order was pending but since we didn’t get a confirmation number – did we want the tickets still?  At that point we bought tickets for DC instead but we ended up getting the MSG tickets too.  This was I believe the night before they recorded it for HBO so they were doing a run through of it with the cameras and all that.  This was also my first time on a Subway and I didn’t realize it just took off before you got a seat so I went flying and ended up being caught by some old guy lol (I am now a Subway pro and can even ride it standing)