Book Review: The Beast Within 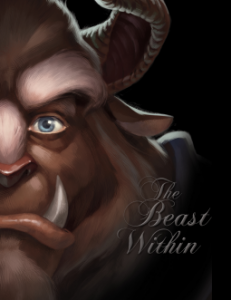 I wasn’t sure exactly what to expect with this book.  I probably shouldn’t have looked up reviews before I read it either, because that seemed to confuse me all the more.  Is this a prequel to Beauty and the Beast? Or a companion piece? Or perhaps a piece based off the same characters but not linked to the movie at all…

I think to a certain extent this is the prequel to the movie because it tells you about Beast and what happened in his earlier years that led to him becoming cursed and turning from a Prince to a Beast.  However, the timelines don’t seem to match up so that where this book ends, the movie picks up, so you may want to keep an open mind when reading this.

The Prince is best friends with Gaston – but after telling a girl he didn’t want to see her anymore because she wasn’t royalty – she and her sister – who as it turns out are all witches – put the curse on him that will turn him into the Beast unless he finds true love.

I have not seen the movie in a while (though I am tempted to go and watch it now) so if there were any inconsistencies with plots or characters they were not enough that it stuck out to me.  I did see the others did notice such inconsistencies and had the book ruined a bit by it.

My best advice is that if you like the movie and want to read some of Beast’s story – then by all means read this book as it is a quick and easy read and I found it to be enjoyable.  Just go into it with an open mind and that it may be in a different time than the movie by Disney and you should be ok 🙂

I also enjoyed that the Prince said that Gaston was the Prince of Buttchinland.  Maybe it was because I was reading it before going to sleep and probably should have been already asleep by that time but I found it to be quite funny!

A cursed prince sits alone in a secluded castle. Few have seen him, but those who claim they have say his hair is wild and nails are sharp–like a beast’s! But how did this prince, once jovial and beloved by the people, come to be a reclusive and bitter monster? And is it possible that he can ever find true love and break the curse that has been placed upon him?