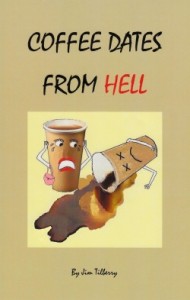 I was hoping that this book was going to be funny.  Unfortunately I didn’t find it all that funny – maybe the jokes went over my head.  A lot of them were political in nature, so that could be the case.  I’ve also never been on a coffee date so perhaps I just couldn’t relate.

There was one bit that I found laugh out loud funny though – when one of the guys said that he lived with his parents – in their basement – so it was pretty much like having his own place.  This line has been used on me – that he lived with his parents in the basement and he’d have no problem sneaking me down there. (And then I figured killing me…)

If political humor is your cup of tea, then you might like this book a bit more than I did – as it features some political characters – including Abe Lincoln.

About the Book
When two single people meet for the first time, they often arrange a “coffee date.” Coffee Dates From Hell is a humorous fictional account of several very bad coffee dates. Many of these dates are disasters from the beginning. Others are destined to be train wrecks if the two people ever see each other again. The coffee dates include several famous people such as Abraham Lincoln, Albert Einstein, and J. Edgar Hoover. You’ll also meet a range of colorful characters including a psychic, a cross dresser, and even a cannibal. The coffee dates include many funny twists and surprises. The humor is often silly, irreverent, and politically incorrect.