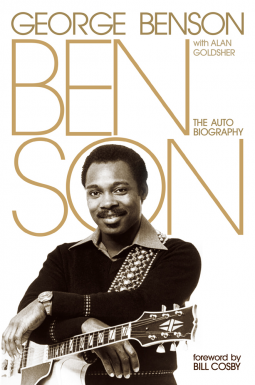 Benson is an autobiography from George Benson. With a foreward by Bill Cosby, you know you’re in for something good.  George has had a career for over 50 years and has received 10 grammys.  Finally, he decided to tell his story, in his own words.  You probably best know him for “On Broadway”, I know that is what I most knew him for – even though it has been recorded by many others as well.

I really liked the writing style – with words italicized for emphasis, it almost felt like I was sitting with George and having him tell me these stories instead of just reading them from paper.

Throughout the book there are interludes, which are little side stories that add some more character to the book. These are a bit shorter than the other chapters in the book as well.

I always prefer to read an autobiography to a biography because it makes the book a bit more personal.  There were certainly some ups and downs in his life and career, but I think that he has led a fantastic career!

Over the course of his fifty-year career, George Benson has performed for hundreds of millions of fans around the world, received ten Grammy Awards, and recorded with some of the most revered musicians of his era. In 2011, he earned a National Endowment of the Arts Jazz Masters Award. And he has finally decided to tell his story.

Benson: The Autobiography follows the musician’s remarkable rise from the ghettos of Pittsburgh to the stages of Dubai, and everywhere in between. His tales of scuffling on the road with jazz legend Brother Jack McDuff, navigating his way through the recording studio with Miles Davis, and emerging as the first true (and truly successful) jazz/soul crossover artist will enthrall devotees of both music history and pop culture.

An open and truthful raconteur, Benson discusses his near-arrest for domestic abuse, the tragic illnesses that afflicted his family, the secret lives of his musical cohorts, and racism’s effect on his life and art. His long-awaited book allows readers to meet one of the most beloved, prolific, and bestselling musicians of any era.