October 7, 2012 by ConcertKatie No Comments 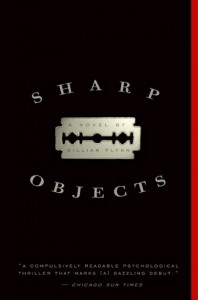 After seeing all the hype over Gone Girl and reading it for myself, I had to get the other 2 books that Gillian Flynn wrote.  Although I didn’t really like the ending of Gone Girl, I really liked Gillians writing style so I got her other 2 books – Sharp Objects and Dark Places.  I read Sharp Objects first and it did not disappoint.

The book is about a girl Camille, who moved away from her small town to Chicago to become a reporter.  When 2 girls turn up missing / killed in her small home town, she decides to go back home to write a story on it.  While there she gets wrapped up in all the rumors and ends up befriending one of the detectives on the case and they share some of the leads they are working on – and share a bit more than that as well.

Meanwhile, at home, Camille tries to get to know her young sister, Amma.  Camille’s other sister, Marian, passed away when she was young.  She was very sick and it seemed like her mother was believing that Amma was sick a lot as well.  It turns out that Amma has many sides to her and Camille was trying to figure her out as well as work on what little relationship she may have with her mother at the same time.

I assume the book gets the title because Camille was a cutter.  She cut all sorts of words in to her body.  Some negative, some positive.  She doesn’t want anyone to see them and always keeps herself hidden.

Throughout the book I had an idea of who I thought this killer was.  I bounced back and forth between two people.  I think it was written in such a way to purposely keep you questioning who you thought like I was.  I won’t say if I was right or not, but I will say that the ending of this book was a lot more satisfying than the ending of Gone Girl.  I very much so enjoyed the book and hope that Dark Places is just as good.

I was not asked to write a review for this book, it is one I read on my own time and thought that I would share with my readers.

WICKED above her hipbone, GIRL across her heart Words are like a road map to reporter Camille Preaker’s troubled past. Fresh from a brief stay at a psych hospital, Camille’s first assignment from the second-rate daily paper where she works brings her reluctantly back to her hometown to cover the murders of two preteen girls.

NASTY on her kneecap, BABYDOLL on her leg Since she left town eight years ago, Camille has hardly spoken to her neurotic, hypochondriac mother or to the half-sister she barely knows: a beautiful thirteen-year-old with an eerie grip on the town. Now, installed again in her family’s Victorian mansion, Camille is haunted by the childhood tragedy she has spent her whole life trying to cut from her memory.

HARMFUL on her wrist, WHORE on her ankle As Camille works to uncover the truth about these violent crimes, she finds herself identifying with the young victims—a bit too strongly. Clues keep leading to dead ends, forcing Camille to unravel the psychological puzzle of her own past to get at the story. Dogged by her own demons, Camille will have to confront what happened to her years before if she wants to survive this homecoming.

With its taut, crafted writing, Sharp Objects is addictive, haunting, and unforgettable.