September 2, 2021 by ConcertKatie No Comments

Saturday night I did my first big amphitheater concert. It had been 1469 days since I had last been at Xfinity Theater in Hartford.  Of course, every weekend before they posted all their policies and set times for that weekend but were radio silent for this one.  I got to the parking lot early to snag a handicapped spot. There wasn’t that big of a line to go in but heads up – they have instituted a clear bag or small clutch policy to make security quicker and so they can avoid touching all your stuff.

The show started at 7 with Cat Power. She never said her name throughout her whole set that I heard and was pretty mellow.  Not many people were in their seats. She dedicated a Rolling Stones song to Charlie Watts who has recently passed. I liked her rendition.

After Cat, it was time for Garbage. I guess being a 90s music kid meant I knew way more songs than I was expecting to going into the show. Their set was really great and Shirley was sure to thank us all for being there plenty of times – even if she did also say we were all weirdos 😉

Edit this setlist | More Garbage setlists
After Garbage, (it’s funny to say “the opening act was Garbage” but that capital G makes all the difference) it was time for Alanis.   There was an intro video spanning her career and I was even surprised to see Justin Timberlake included. The tour was a Jagged Little Pill 25th Anniversary tour. (Well, now, 26th, thanks Covid)  That CD was one of my very first when I got my first walkman in 6th grade.  If I am remembering the tracklist accurately, she played everything from the CD including the hidden track – which was done as part of the encore with a bit of a genre mix up for each verse that was a lot of fun.
I’ve seen complaints that the set “had no flow” and she just wandered around the stage and lip synched.  I do not believe she lip synched because when she was wandering around the stage you certainly could tell she was with how she was singing.  She did stay centered at a mic for some of the show as well as played a harmonica and a really shiny guitar.
My favorite was when she updated “Ironic” for more modern times.  While she had the crowd sing most of it (and the crowd was LOUD! For both Garbage and Alanis) she took the mic back for “It’s like meeting the man of my dreams and then meeting his … beautiful husband” and the crowd went wild.

Since I was under the pavilion for the show, I am not sure at what point it started to rain, but there was a slight drizzle as I walked back to my car and then it completely started to downpour about 5 seconds after I got in my car.  But that didn’t stop a small crowd of people surrounding a guy who had set up a drumset outside the venue and was playing 90s hits.  Mostly Alanis but when I went by it was Natalie Imbruglia’s Torn and well… if you know, you know.
I had been waiting a long time to see Alanis and she did not disappoint! 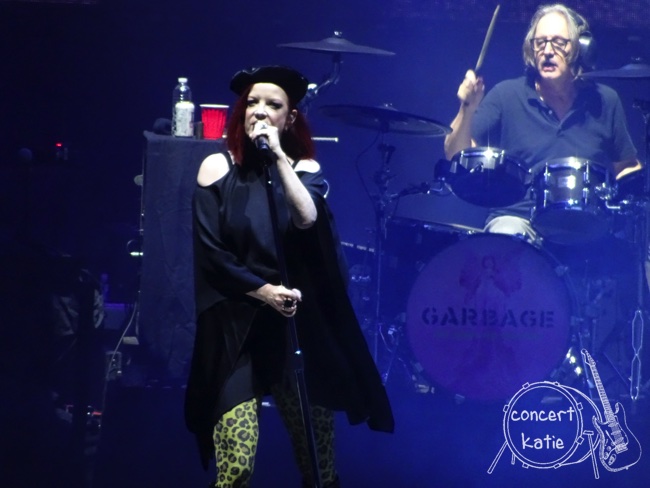 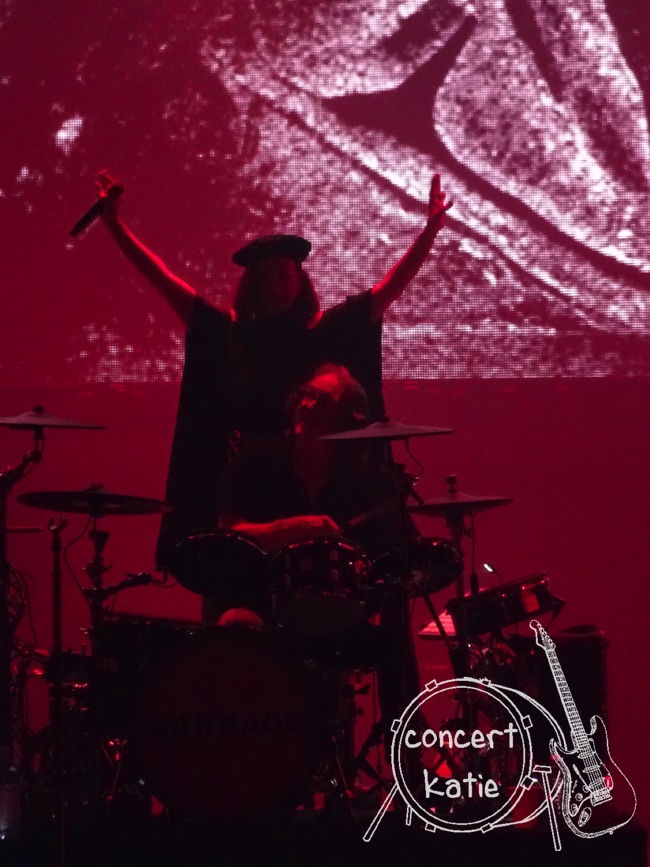 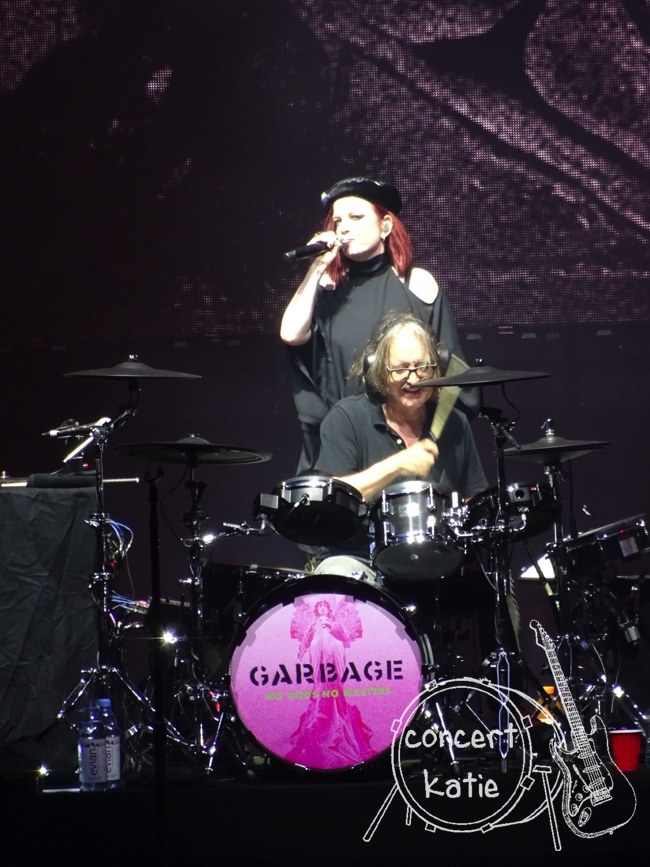 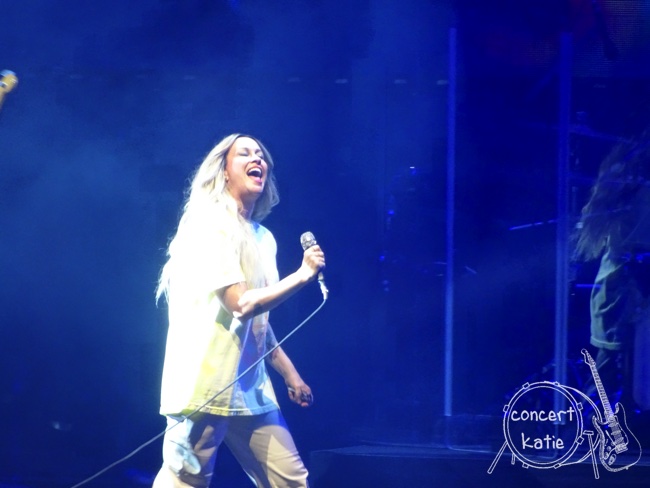 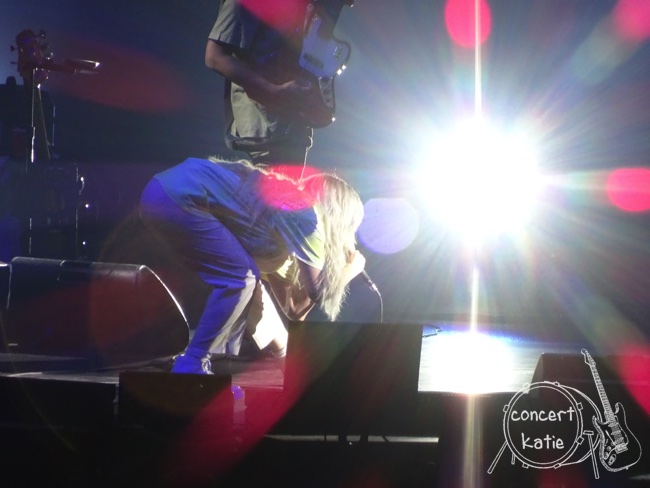 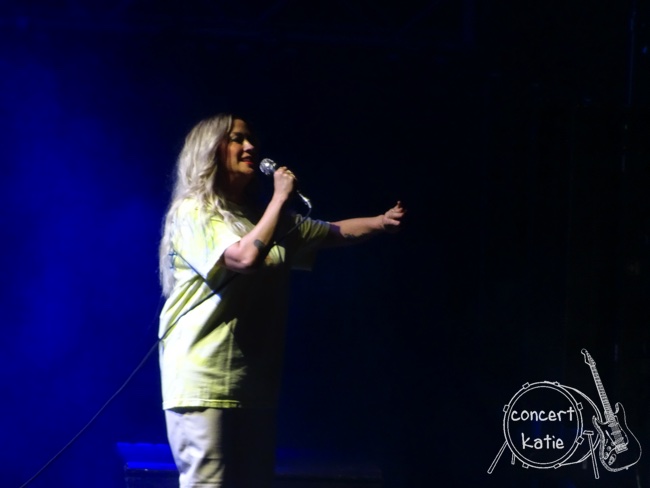 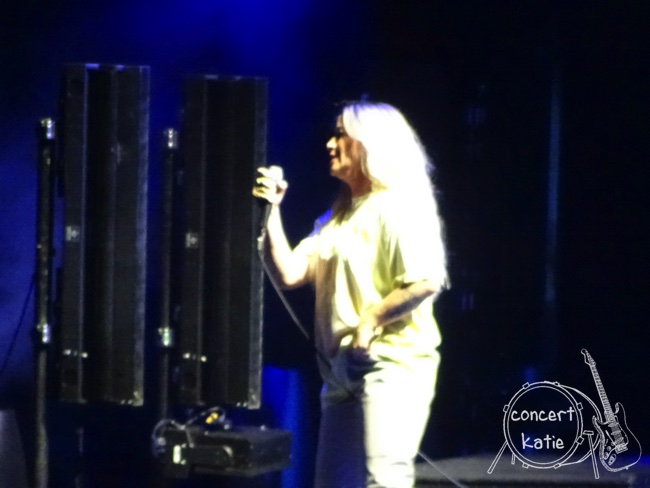 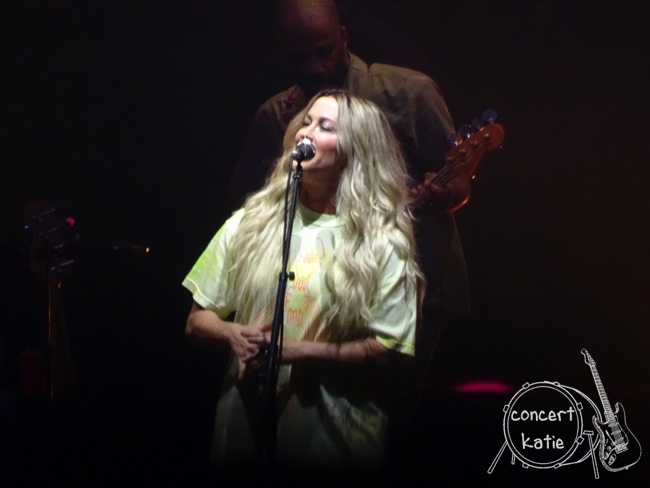 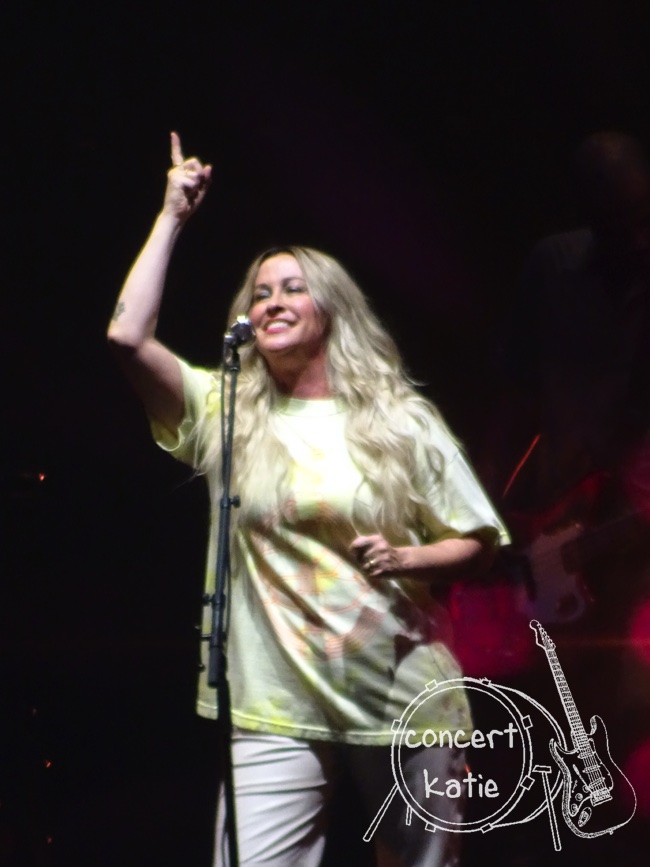 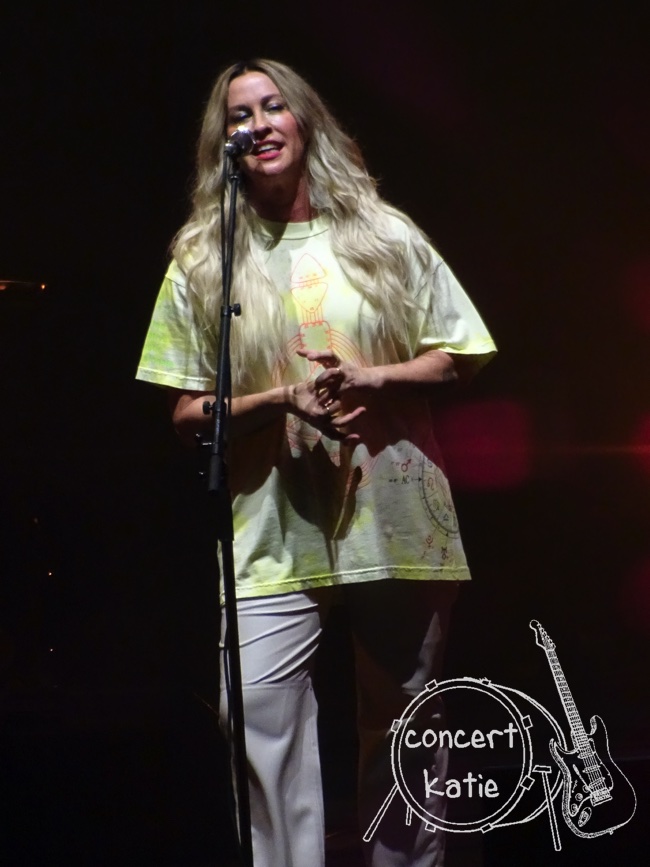 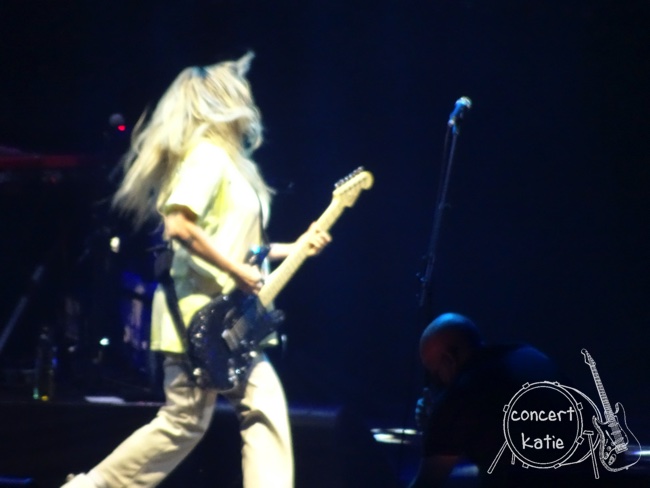 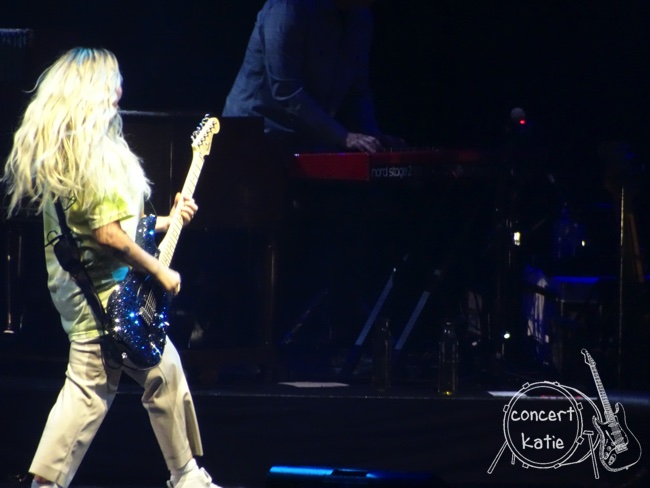 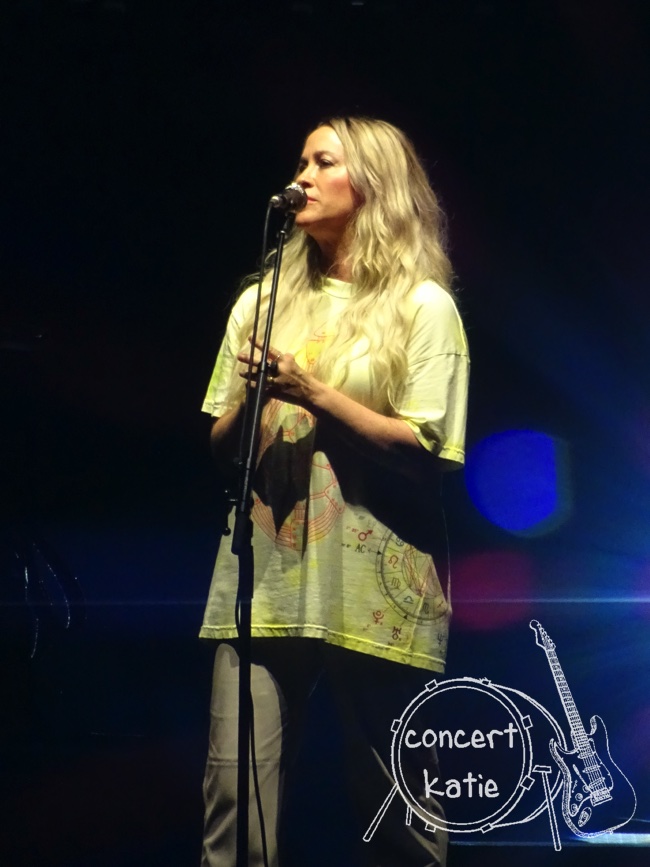