October 19, 2019 by ConcertKatie No Comments

When I saw that Haley Reinhart was coming to the Fairfield Theater, I was pretty pumped.  She was one of my favorites that season of Idol (and the only one the whole house agreed on being great!) and I hadn’t seen her since I had gone to the Idol tour 2 times the year they toured.  When I found out that Tyler Hilton was going to be opening the show I was even more excited because I love any chance I can get to see Tyler!  Before the show I was in the parking lot and heard “When the Stars Go Blue” from a busker near the train station.  It turned out, Tyler heard too and stepped out of his RV to cheer (and later go see him to record some videos for Tyler’s Instagram)  How cool!  Tyler did a shorter set than I am used to since he was opening and is usually the headliner in Fairfield.  It is always interesting to see how artists change their banter based on if they know everyone is there to see them or if they are trying to win them over.  I don’t think I ever heard his story about his roommates in Nashville quitting their office job to pursue music full time and ending up forming Lady Antebellum!  I knew they had a connection but somehow had never pieced it all together!  Before Haley’s set I did the VIP M&G experience and she did 2 songs for us – Honey There’s the Door and Shook.  Then she signed merch for us and did photos.  Just as sweet as I remembered from when I met her on the Idol tour!  I was kind of mesmerized by her nail polish when she was on stage because it was red, but when the lights hit it, it had this iridescent chameleon color change look to it.  I don’t know if that was how it was supposed to react to lighting or just a cool thing that was happening.  This was Haley’s first show of this part of her tour so we got a couple songs that had never been done live before! She did a 14 song set and a 3 song encore! The majority from her latest release – Lo-Fi Soul (It is the Lo-Fi Soul Tour, after all) and a few from her other releases as well.  I just love how she re did several covers to fit with her bluesy/jazzy sound! Just an amazing, amazing voice and I am surprised she isn’t more popular and on bigger stages – but I guess her style is a bit niche.  Hopefully she will come back this way again soon! 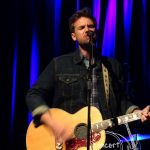 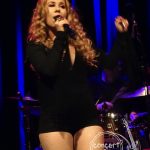 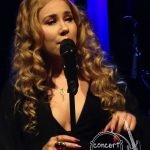