When Jon McLaughlin announced that he was going to be opening for 2Cellos and that their tour would be coming to Mohegan Sun, I immediately started looking for tickets. It had already been on sale, so all my favorite spots seemed to be taken.  A friend ended up snagging a free pair of tickets for us and for the low, low price of free, I’ll sit almost anywhere.  We had a decent spot in the back of the arena.  Jon opened and did 6 songs and seemed to win over the crowd a lot, everyone seemed to be having a lot of fun with the call and response he did in his songs.  After his set he announced he’d be signing autographs so we headed over to say hi.

When we got back to our seats, 2Cellos was already on their 2nd song.  I had no idea anything about 2Cellos before this show and didn’t at all know what to expect.  I have to say, it was one of the weirdest shows I have ever been to, but was definitely enjoyable.  There are 2 cellos on stage and that’s it (except for when a drummer joins them) and they play a lot of songs you will probably recognize.  One of them spoke only once while the other seemed to speak more – but said “This next song… is beautiful… and romantic…” before every song he introduced. It was comical.  Towards the end, things really picked up and one of them was even playing cello while walking through the crowd with it strapped to him and while spinning around in circles on his back on the stage.  They also tried to get some sing a longs going – especially the “Why Why?” in Human Nature and a lot towards the end when they did Highway to Hell and I Can’t Get No Satisfaction.

I’m really glad I ended up going, had Jon not been opening I wouldn’t have even thought about going to this show – it was amazing how I had never heard of these guys yet they had a jam packed arena crowd on their feet and totally into their performance. Usually they say to pay attention to the openers but sometimes the openers (from 12 years ago) become one of your favorites and then end up opening you up to a whole new world with a headliner! 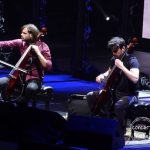 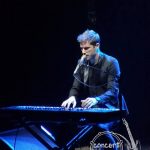