January 15, 2019 by ConcertKatie No Comments 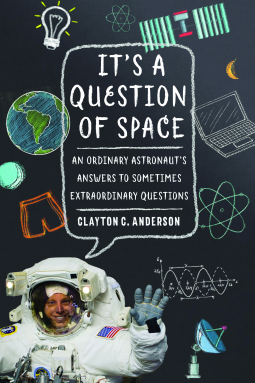 It’s a Question of Space is an astronaut, Clayton C. Anderson, who lived in space for 167 days answering questions sent to him via social media about what it’s like to be in space and be an astronaut. Growing up I always wanted to be an astronaut so I was drawn to this book to find out what it would really be like.  There’s also a fun mention of Lance Bass in the book, so that is always a plus.

This was a very interesting read and I liked it as a Q&A moreso than just a book to read through since if I wasn’t particularly interested in a question (though I will admit there weren’t many of those) I could just skip over it to the next question.  I learned a lot and really enjoyed this book!

I received a free e-copy of this book in order to write this review. I was not otherwise compensated. This book was released July 1, 2018 from University of Nebraska Press.

Having spent over 150 days on his first tour of the International Space Station, it’s safe to say that Clayton C. Anderson knows a thing or two about space travel. Now retired and affectionately known as “Astro Clay” by his many admirers on social media and the Internet, Anderson has fielded thousands of questions over the years about spaceflight, living in space, and what it’s like to be an astronaut. Written with honesty and razor-sharp wit, It’s a Question of Space gathers Anderson’s often humorous answers to these questions and more in a book that will beguile young adults and space buffs alike.

Covering topics as intriguing as walking in space, what astronauts are supposed to do when they see UFOs, and what role astronauts play in espionage, Anderson’s book is written in an accessible question-and-answer format that covers nearly all aspects of life in space imaginable. From living in zero gravity to going to the bathroom up there, It’s a Question of Space leaves no stone unturned in this witty firsthand account of life as an astronaut.