January 14, 2019 by ConcertKatie No Comments 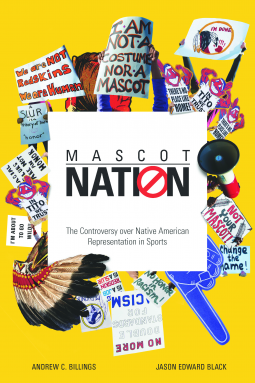 Mascot Nation focuses on the controversy over Native American Representation in Sports.  To be honest I watch a decent amount of sports but have never really thought about how Native Americans are represented especially at the mascot level.  I know that news picks up every now and then about wanting to change some of the mascots to something different, but change never really seems to happen.  This book goes into more detail about that and how there are polls that seem to be skewed to say that Native Americans aren’t offended by it – and if they aren’t, why should anyone else be? But most of these polls taken can’t prove that only those voting were Native Americans.

This book focuses more on the academics of the issue and it definitely opened my eyes a bit and will have me looking at this controversy in a different way now.

I received a free e-copy of this book in order to write this review. I was not otherwise compensated.  This book was released October 8, 2018 through University of Illinois Press.

The issue of Native American mascots in sports raises passions but also a raft of often-unasked questions. Which voices get a hearing in an argument? What meanings do we ascribe to mascots? Who do these Indians and warriors really represent?

Andrew C. Billings and Jason Edward Black go beyond the media bluster to reassess the mascot controversy. Their multi-dimensional study delves into the textual, visual, and ritualistic and performative aspects of sports mascots. Their original research, meanwhile, surveys sports fans themselves on their thoughts when a specific mascot faces censure. The result is a book that merges critical-cultural analysis with qualitative data to offer an innovative approach to understanding the camps and fault lines on each side of the issue, the stakes in mascot debates, whether common ground can exist and, if so, how we might find it.

Andrew C. Billings is a professor and Ronald Reagan Chair of Broadcasting in the Department of Journalism and Creative Media at the University of Alabama. He is the coauthor of Olympic Television: Broadcasting the Biggest Show on Earth and Media and the Coming Out of Gay Male Athletes in American Team Sports. Jason Edward Black is chair and a professor of communication studies at the University of North Carolina at Charlotte. He is a coeditor of Decolonizing Native American Rhetoric: Communicating Self-Determination, the author of American Indians and the Rhetoric of Removal and Allotment, and a coeditor of An Archive of Hope: Harvey Milk’s Speeches and Writings.

« Previous post
Book Review: It’s a Question of Space
Next post »
Book Review: How To Date Men When You Hate Men