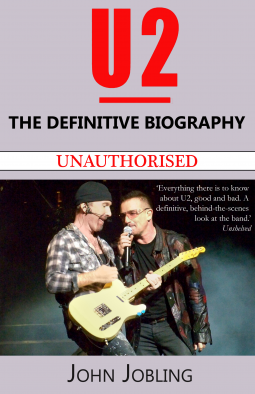 U2 is rock-and-roll royalty. U2: The Definitive Biography is the first unauthorized biography of the band to document their career. The book contains previously unpublished photographs and interviews with the band’s friends and business associates.  It also goes into the bands humanitarian work.

I’m not a huge U2 fan so while there are some myths about the band “debunked”, I really didn’t know there were myths to begin with.  This book goes pretty in depth with the history, from the band just starting out to more present day.

The photos included in the middle of the book are pretty fantastic, beginning with photos of Bono when he was 15 or 16 years old!

I received a free e-copy of this book in order to write this review, I was not otherwise compensated.  This book was released May 8, 2018 by Thistle Publishing.

John Jobling takes readers beyond the myth in this unauthorized biography to present the first comprehensive account of the illustrious Irish rockers in 25 years. Drawing on extensive interviews with insiders including record label scouts, studio presidents, politicians, music critics, and childhood friends, Jobling investigates the U2’s most personal relationships and controversial business practices, delivering a vivid portrait that traces the rock phenomenon from its conception to post-punk champions to political crusaders. Filled with captivating revelations, reader will learn:

– How Bono, the Edge, and Larry Mullen, Jr. worshiped with a Charismatic Christian church that practiced speaking in tongues during the band’s early days

– Creative tensions within the band and power struggles among management

– The disconnect between the band’s personal lives and public personas

Sure to inspire debate with every music lover, U2: The Definitive Biography humanizes the band and paints an honest picture of a band’s rise to the top, plunging into the heart and underlying soul of this iconic rock and roll band.