January 26, 2019 by ConcertKatie No Comments 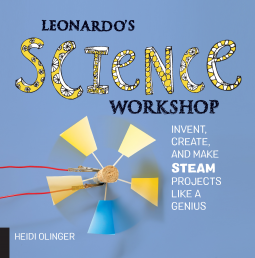 Leonardo’s Science Workshop is a book of projects to invent, create, and make steam projects like a genius.  This book has 6 chapters: Take Wing, Moving Along: The Science of Motion, One Energy source flows to the next, designing technologies, rocks and stars and write a letter to Leonardo.  Each chapter has step by step instructions as well as some text history about the hands on activities as well. I liked that in addition to showing you some of these activities it also talks about the science behind it, so you can learn a little bit and then do a hands on example.  I was always much more of a hands on learner and needed to see it to believe it so these activities would have been great for me as a kid.  As an engineer, this book had a lot of really fun options in it – especially relating to my job now – like making paper airplanes!  I honestly wish I had the time and supplies to go through and make everything that is listed in this book, each page just had a cooler and cooler activity on it.

I received a free e-copy of this book in order to write this review, I was not otherwise compensated.  This book was released January 1, 2019 on Quarry Books.

More than 500 years ago, Leonardo knew that the fields of science, technology, engineering, art, and mathematics (STEAM) are all connected. The insatiably curious Leonardo examined not just the outer appearance of his art subjects, but the science that explained them. He began his studies as a painter, but his curiosity, diligence, and genius made him also a master sculptor, architect, designer, scientist, engineer, and inventor. The Leonardo’s Workshop series shares this spirit of multidisciplinary inquiry with children through accessible, engaging explanations and hands-on learning.

This fascinating book harnesses children’s innate curiosity to explore some of Leonardo’s favorite subjects, including flight, motion, technology design, perspective, and astronomy. After each topic is explained with concepts from physics, chemistry, math, and engineering, kids can experience the principles first-hand with step-by-step STEAM projects. They will explore:

The science of motion by building a windup dragonfly

The movement of electrons by making cereal “dance”

Insight from other great thinkers—such as Galileo Galilei, James Clerk Maxwell, and Sir Isaac Newton—are woven into the lessons throughout.