A couple of days after seeing O-Town at the Wolf Den, they made their debut at one of my favorite venues, Stage One in Fairfield, CT.  This show was a bit different because we were able to purchase a pre-show VIP package to spend some more time with the band.  We were told to be in line by 3:45, which we were, but unfortunately due to other venue restrictions we were stuck out in the cold for nearly an hour and a half.  Upon entering the venue we got to watch soundcheck with the guys – where they did Love Should Be A Crime, 2 of their new songs – No Goodnight and Whatchu Wanna Do – which was explained by Jacob by being about sex but ended up with us all being taken to Church… and I think the other one they did was Shady Business.  After the goofings around of soundcheck, we got 2 photos with the band and then had some time to kill before the show started.

Fairfield Theater is a seated venue, so we purchased a membership to the venue in order to get an early shot at tickets and got 2 seats in front row and 2 seats in 2nd row, everything else was already snapped up by the time I got in to buy them.  I kept saying that the 4 empty seats in the front row (center) were going to be “old” people who had no idea who the band were, so I just had to laugh when my prediction was correct.  It was really awkward and the guys were trying to make them feel welcome by sitting on the edge of the stage and singing to them and stuff… but they ended up leaving about half way through the set.  Our friends jumped down to join us in the front row and it seemed like that changed the whole vibe of the show – the guys came closer to the front row and were just a bit more relaxed once they knew it was fans in the front! The set was the same as the show at the wolf den, super high energy and a lot of fun.

After the show, we did our selfie line and got to chat with the guys a bit about the people in the front – Dan said he was glad they left so “our girls” could come down front with us and that it was a really bizarre experience.  Jacob said they were still working on routing for the new tour for this summer, but we should like who they will be touring with. That made me curious to know who he thought I would be excited about seeing… and hoped it wouldn’t be Aaron Carter since they are doing some show with him in the UK. 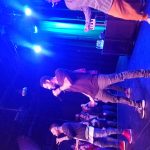 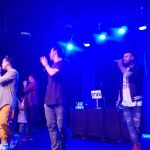 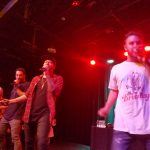 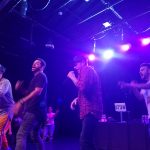