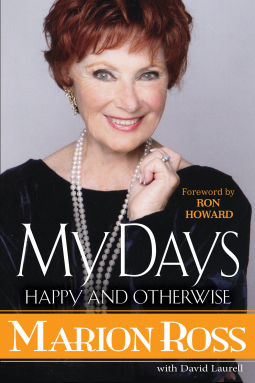 My Days is all about Marion Ross, who you probably know as Mrs. C from Happy Days.  Marion had always said that she would never write an autobiography, but at the urging of her son she ended up writing one and I think she did a great job with it.  The first half of the book is about her growing up, how she decided she wanted to be an actress and background on her family growing up and her marriage to a man who turned out to be a functioning alcoholic.  She was born “Marian” but changed it to “Marion” simply because she thought that name would look better on a marquee. She always wanted to be a star and the center of attention.  About halfway through the book she gets to her Happy Days days and after talking about them a bit the majority of the second half of the book was an approach I thought to be very interesting for an autobiography – she had David Laurell interview some of her coworkers/ cast mates – including Garry Marshall and Erin Moran, both of whom sadly passed away from the time the book was started to the time she finished and released it.  She also interviews with Ron Howard (who also wrote the foreward), Henry Winkler, Scott Baio and her children.  All of them seem to have the same opinion of her – she was wonderful and a kick ass actress.

I really enjoyed this book and how it was constructed. It was nice to hear about Marion’s personal life, which she was previously pretty guarded about talking about.

For eleven seasons, Marion Ross was head of one of America’s favorite television households. Now meet the lovable real-life woman behind the Happy Days mom . . .

Before she was affectionately known to millions as “Mrs. C.,” Marion Ross began her career as a Paramount starlet who went on to appear in nearly every major TV series of the 1950s and 1960s—including Love, American Style, in which she donned an apron that would cinch her career. Soon after came the fateful phone call from producer Garry Marshall that made her an “overnight” success, and changed her life . . .

In this warm and candid memoir, filled with loving recollections from the award-winning Happy Days team—from break-out star Henry Winkler to Cunningham “wild child” Erin Moran—Ross shares what it was like to be a starry-eyed young girl with dreams in poor, rural Minnesota, and the resilience, sacrifices, and determination it took to make them come true. She recalls her early years in the business, being in the company of such luminaries as Humphrey Bogart, Lauren Bacall, and Noel Coward, yet always feeling the Hollywood outsider—a painful invisibility that mirrored her own childhood. She reveals the absolute joys of playing a wife and mother on TV, and the struggles of maintaining those roles in real life. But among Ross’s most heart-rending recollections are those of finally finding a soulmate—another secret hope of hers made true well beyond her expectations.

Funny, poignant, and revealing—and featuring Garry Marshall’s final illuminating interview—as well as a touching foreword from her “TV son” Ron Howard, and a conversation with her real-life son and daughter, Marion Ross’s story is one of inspiration, persistence, and gratitude. It’s also a glowing tribute to all those who fulfilled her dreams—and in turn, gave us some of the happiest days of our own lives.