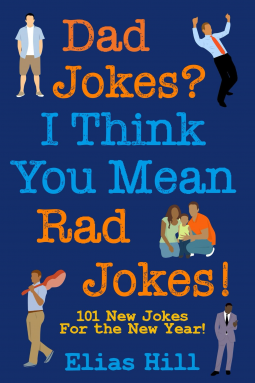 I braced myself before opening up this book filled with 101 new “dad jokes”.  The book is illustrated so that it actually looks like Dads are telling the jokes.  I think that most of these will make you chuckle – but I’m not saying if they will because you think they are funny or because they are just that bad…

Some of my favorites included:

I sympathize with batteries. I’m never included in anything either.

If I hear you slam the doors one more time… I’ll be really upset ’cause that’s my favorite band.

Definitely a very punny book and sure to get you some laughs and definitely some groans if you read it out loud to a group!

Dad jokes. They’re not regular jokes. In fact, if a dad jokes make you bust out laughing, then there is something wrong. Dad jokes are intended to be bad. Eyerolling, groaning bad. Dad jokes are clever and dad jokes are punny, but dad jokes are mostly for dad’s enjoyment, not the people around him.

Here is a list of groups who probably won’t be into dad jokes so much:

moms
aunts
pets
waitstaff
cashiers
Oprah’s book club members
teachers
carnival workers
royaltyBut hey, if you’re in one of the above-mentioned groups and get dad jokes and love dad jokes then forget all that. Why not pick up a copy of Dad Jokes? I Think You Mean Rad Jokes! today and share some dad jokes with the victims nearest you.

How did the blacksmith get out of the haunted house? He made a bolt for the door!