Chrissy Metz This is Me book tour

Chrissy Metz, better known as Kate from This is Us, recently released a book aptly titled “This is Me” and one of her tour stops on the book tour was in Clinton, CT!  We bought tickets right away and they quickly sold out.  Due to the demand, the book store found a larger venue to hold the event at and released even more tickets, which again promptly sold out.  When I arrived at the school the event was being held at, I was not surprised to see very few men in line.  The event, set to start at 7pm started more like 7:30PM with Chrissy chatting a bit about the book and her life and getting the role of Kate with one of our local newscasters.  After the chat, around 8pm, they began lining us up row by row to go meet Chrissy.  We couldn’t get photos with her (posed) but we did get a chance to chat with her briefly which was really nice.  She signed the books and off we went.  There were about 700 people there so the poor girl was there hours singing – but seemed genuine and grateful to everyone for coming out to see her.  I haven’t had a chance to read the book yet, but expect a review once I do end up getting around to it! (As you can probably tell, I am working through the backlog of a lot of other books that I have to read!) 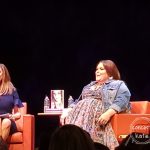 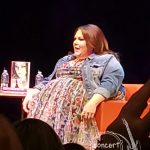 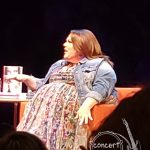 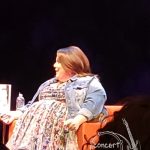 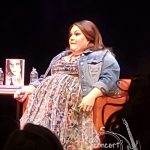 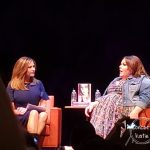