July 6, 2018 by ConcertKatie No Comments 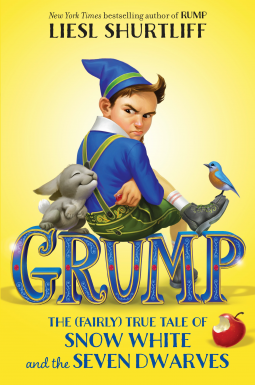 Snow White is my favorite Disney Princess and has been since i was a kid and Grumpy has recently become my favorite dwarf, since a great interaction with him at Disney World!  So I was pretty pumped when I saw this book that seemed to be about Grumpy.

This book is told from the dwarves perspective – they are usually born way, way underground but this dwarf in particular was born close to the surface absolutely hated being down far in the ground.  So then he was NOT happy when he was added as the “seventh” dwarf – the one that everyone can boss around – working down almost as far as you can go.

But somehow, the crew ended up at the surface and interacting with the Queen and her step-daughter, Snow White.  He and the Queen are fast friends because they are both outcasts, but he also has a special spot for Snow White – and ends up saving her life.  This is all the story of Snow White and the 7 Dwarves from “Grump’s” perspective – but years later after Snow White passed away, humans continued to tell the story and forgot/decided that the dwarves all didn’t have real names – and more and more of the story got changed to be more about the humans, because humans always need to be the center of attention!

This is a really nice and different perspective on a story you’ve probably heard over and over again.  My favorite quote from the book was: “I just wish I’d known that getting your wish comes with its own load of rubble”

I received a free e-copy of  this book in order to write this review, I was not otherwise compensated.

From the New York Times bestselling author of Rump, comes the true story behind another unlikely hero: a grumpy dwarf who gets tangled up in Snow White’s feud with the wicked queen.

Ever since he was a dwarfling, Borlen (nicknamed “Grump”) has dreamed of visiting The Surface, so when opportunity knocks, he leaves his cavern home behind.
At first, life aboveground is a dream come true. Queen Elfrieda Veronika Ingrid Lenore (E.V.I.L.) is the best friend Grump always wanted, feeding him all the rubies he can eat and allowing him to rule at her side in exchange for magic and information. But as time goes on, Grump starts to suspect that Queen E.V.I.L. may not be as nice as she seems. . . .
When the queen commands him to carry out a horrible task against her stepdaughter Snow White, Grump is in over his head. He’s bound by magic to help the queen, but also to protect Snow White. As if that wasn’t stressful enough, the queen keeps bugging him for updates through her magic mirror! He’ll have to dig deep to find a way out of this pickle, and that’s enough to make any dwarf Grumpy indeed.