Book Review: According to a Source 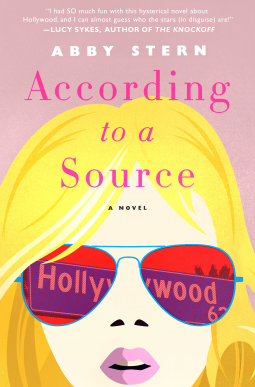 According to a Source is about Ella who sometimes goes as Bella who works for a gossip mag getting all the latest dirt on all your favorite celebrities.  All the names of the celebrities in the books are what you might see in blind items on the internet but you can kind of get an idea of who they are based off of – “not so innocent oversexualized pop star” – yeah, thats gotta be loosely based on Britney Spears, right?  Ella manages to get all the dirt for The Life and even has managed to befriend actress and socialite Holiday Hall – who knows her secret, and her code that she only writes about things that happen in public.

When a new editor takes over at the magazine and tells the freelancers that there is only room for 4 of them and they will have to earn points based on what kind of stories they get, Ella struggles to keep up.  Her mother is very sick and she doesn’t want to tell anything about Holiday, even though she probably knows a secret or two.  When Ella finds herself in the middle of a scandal with Holiday and doesn’t report it to her editor, she pressures her for information and Ella cracks.

Can Ella make right after ruining so many careers, friendships and relationships?  She’s not sure, but she’s hit rock bottom and she is certainly going to try.

As someone who used to try and figure out all the blind items I read on the internet, this book was an interesting look at “behind the scenes” of how that information was sourced.  It also had a great storyline and just enough drama to keep things just over the top enough to keep me wanting to turn the page.

We live in a society obsessed with celebrity, but have you ever wondered who is on the inside gathering the best celebrity gossip and how do they get access? According to a Source: A Novel by Abby Stern dishes on this behind the scenes world in a way that only a Hollywood insider could.

Ella Warren works for celebrity news website, The Life, as a club reporter. She’s assigned to stake out Hollywood’s hottest clubs and spy on the celebrities inside. When Ella is pressured by her Devil Wears Prada-type boss to find an exclusive story to keep her job, she has to decide if being in Hollywood’s elite inner circle is worth jeopardizing her friendship with actress Holiday Hall, her budding romance with Holiday’s agent, and her family.

A juicy, big-hearted novel about a young woman who loses herself in a fast-paced, glamorous world where finding your authentic self isn’t easy.